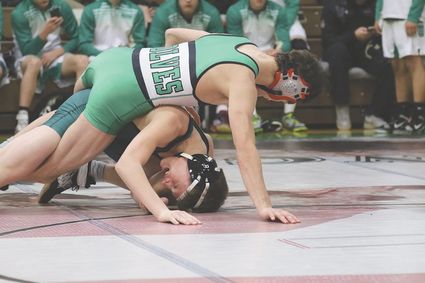 Mica Herrera works over his opponent during the Moorcroft Mixer.

The Moorcroft High School gym was packed this weekend with wrestlers, parents and fans alike for the ninth annual Moorcroft Mixer wrestling tournament held Friday and Saturday. The Wolves hosted a great tournament with 19 teams from Wyoming, Montana, North Dakota and South Dakota.

It was an all-out battle for the championship to win one of the 15 buckles donated by individual donors. The Wolves had five wrestlers in the finals and walked away with three of the buckles. As a team, they placed second and had many top six placers. Individual placers were: