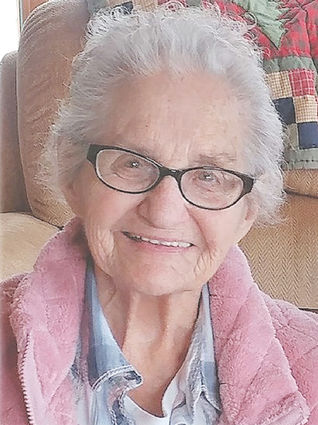 Marylou was a Valentine's Day baby, born on February 14, 1927, in Thomasboro, Illinois, to Ormal and Chloe Pearl (Webster) James. She was a big sister to five brothers: her twin Marlou, Hardin, Sherman, Eddie and Lee. A brother, Ormal Jr., died before Marylou was born, and two sisters, Fanny and Sarah, died in childhood.

The James family lived on an Illinois farm, where her dad raised corn and Quarter Horses. One of Marylou's greatest accomplishments of her youth was raising and training a palomino paint mare, Queen, to be her trick-riding horse.

In her late teens, Marylou worked at the local Steak 'n Shake as a carhop, and met her future husband, airman Robert "Bob" Ulrich, when she waited on him and his Air Force buddies. At the time, Bob was stationed at Chanute Air Base in Rantoul, Illinois.

Bob and Marylou married in Indianapolis, Indiana, and Marylou remained on the farm while Bob served a short stint at Middletown Air Force Base (AFB) in Middletown, Pennsylvania, and some time overseas in the Philippines.

After daughter Roberta (Bobbi) was born in Danville, Illinois, they moved to McGuire AFB in Wrightstown, New Jersey, where Jeanne and Stephen joined the family. While stationed at McGuire, Bob was accepted to the nuclear power school, necessitating a move to Fort Belvoir, Virginia. Karen was born while they resided in Woodbridge, Virginia.

After two years, they moved to Sundance Air Force Station in Wyoming, and Bob's new job at the Warren Peak nuclear power plant on a radar station. Marylou was seven months pregnant on the cross-country move in June; Sandra was born that fall. Their last child, Susan, was born two years later.

She worked hard, and played hard on bowling leagues, both women's and mixed doubles teams, and enjoyed shooting pool in tournaments. She also played a mean hand of 31, one of her favorite card games.

Marylou's garden was a great source of comfort to her-working the soil made her feel close to her Illinois roots. And always, she loved getting her hands on a horse any chance she got.

Marylou is survived by her husband of 69 years, Bob; daughters Bobbi Scalea, Jeanne (John) Rogers, Karen Sholes, Sandra Edwards and Susan (Rod) Mathis; a son Stephen (Charlene); brothers Hardin and Eddie; 17 grandchildren; 33 great-grandchildren (two great-great-grandchildren are due this coming summer); and several nieces and nephews. In addition to her parents, she was preceded in death by four brothers and two sisters, and a grandson and a granddaughter.

Memorial services were held Tuesday, January 29, 2019 at the Church of Christ in Sundance.