A path of least resistance 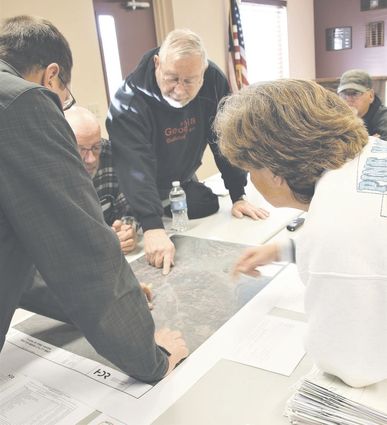 The Pine Haven Town Council spoke with HDR Engineering's Heath Turbiville on Monday afternoon about the town's plan to install a bike/walking path within the next couple of years.

The bike path, under the TEA Program, is available through an 80/20 grant from the Wyoming Department of Transportation and can be built in phases as $2 million is available for which to apply every year. This year's letter of intent must be received by the department between March 30 and April 30 or in September for consideration.

The matter of the route for the eight foot wide concrete path was discussed at length. After considering drainage, which will be affected by the building of the walkway, the group tentatively decided on a route that travels along Pendleton Drive from Pine Haven Road around the outskirts of town toward the north along Boe Drive, splitting at Lakeview and the dog leg joining into Waters Drive and continuing across Pine Haven Road to loop back on Waters to Pine Haven Road at the top of the hill.

Part of this area along the northwest phase are owned by neighboring rancher and town benefactor Skip Waters and the council will be speaking to him if this route is ultimately chosen.

The governing body talked with Treasurer Barb Hardy regarding available funding to match the grant. Hardy was asked to seek advice from County Attorney Joe Baron to ascertain the possibility of receiving funding from the third cent specific tax for infrastructure based on the need for drainage for the roads that would also benefit said path.

The town would be responsible for $70,000 if the council applies for $350,000; "Where would we come up with that?" asked Councilwoman Karla Brandenburg.

She asked if $350,000 "could take it up [east] Waters Drive to meet Pine Haven Road" as a first endeavor, starting the new path from the established walkway; Turbiville said, "Maybe close."

The body agreed that many of the town residents walk along the road toward the grocery store and the long term goal is to have an actual biking/walking corridor traveling along Pine Haven Road up the hill.

The biggest challenge to creating this walkway is the steepness of the hill in the middle of town; the bike lane must be handicapped accessible. Turbiville acknowledged the issue, but told the group that the path can be built with level stages to mitigate the climb if the lane is put on Pine Haven Road instead of Waters Drive.

Turbiville advised the council to create a map of the desired route “and get them to buy into funding it for several years”.

The next step will be a Statement of Feasibility that HDR will create.