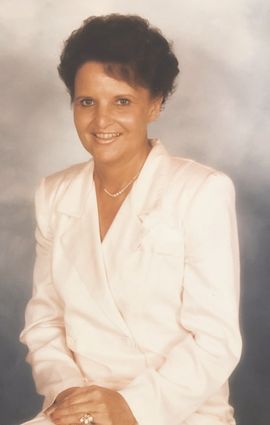 Trudy was born January 31, 1935, in East Orange, NJ, the daughter of John Hulick Conover and Jancina (Janet) Kjargaard. On June 21, 1953, she married Robert Policky in Omaha, NE sharing 19 adventure-filled years raising three boys until Robert's passing in 1972. On June 14, 1983, God blessed her with a fantastic soulmate when she married Charlie Hoskins in St. Onge, SD.

Trudy had a passion for keeping a nice home, antiquing, traveling and partnering with Charlie in their sales career. She had an insistent yet loving spirit.

Trudy absolutely cherished her children and grandchildren, spending endless hours enjoying their many activities, serving as a phenomenal cheerleader. She was selflessly devoted to her family, listening empathically to their concerns, their dreams and encouraging them to reach their fullest potential.

She put thousands and thousands of miles on Jeep Waggoneers taking her boys to alpine skiing events throughout the Rockies. She was an avid athlete in her youth playing on the HS tennis team. She loved the outdoors, especially water skiing and family time on the lake.

We celebrated her life February 9, 2019 at the Wilson Funeral Home, Canon City, CO – services and reception followed. Trudy will be laid to rest in the Rose Hill Cemetery in Spearfish, South Dakota – graveside services at 2 p.m., February 14, 2019.

In lieu of flowers, a memorial has been established in her honor to benefit the Salida Cyclones Swim Team. Please submit donations to Wilson Funeral Home, 1449 S. 9th Street, Canon City, CO 81212.

To know her was to love her.

Local arrangements are under the care of Fidler-Isburg Funeral Chapels & Isburg Crematory of Spearfish, South Dakota.