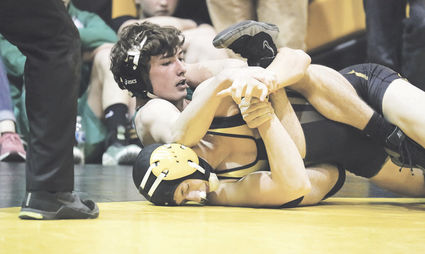 Darrian Black take down his opponent at regionals.

The Wolves wrestled in the 2A East Regional Tournament this past Saturday in Wright. There, they competed against ten other teams from the east region for the championship title and qualified 16 of their 17 wrestlers to compete at the state tournament in Casper this coming weekend.

They had five in the finals and finished with four champions and many in the top four places. Individual results were:

Champions – 106 Sean Buckmiller pinned his way through the tournament, winning his finals match against Kaden Brothwell of Southeast with a pin in 4:53 to take the championship; 138 Parker Se...