Cause of house fire confirmed 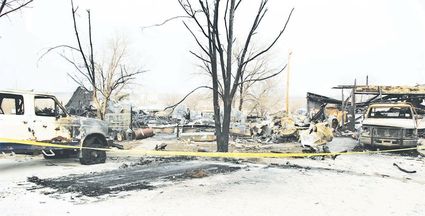 A home and three vehicles were destroyed by the fire last Tuesday morning.

At Monday night's meeting of the town council, Fire Chief Fred Devish reported to the governing body the cause of the structure fire that took the home of a Moorcroft family in the early hours of last Tuesday morning.

According to the chief, the fire originated with an electric space heater that had been in operation on the front porch.

There were 23 firemen on site, he said: 13 volunteers from Moorcroft, six from Pine Haven and four from Sundance.

The first truck was at the scene within five minutes and spraying water within ten minutes of the call, according to volunteer Ben Glenn, who w...