Marilyn was born September 22, 1930 to DeWitt and Wilma (Clark) Malvin in Belle Fourche. She graduated from Belle Fourche High School in 1949 and later attended college in Brookings, South Dakota. Her college days were interrupted to provide care for her grandmother, Nonie Clark.

On September 19, 1953, she married Donald F. Denzin, also of Belle Fourche. To this union, two children were born, Terry and Kenny.

Don and Marilyn enjoyed nearly 62 years of marriage, living first in Belle Fourche and later in Sundance. They moved to Sundance to open and operate Don's Cleaners. Upon closing that business, Marilyn worked at the Crook County Hospital.

Marilyn and Don were devoted to their community, remaining active in numerous organizations for most of their lives. Upon retirement, they spent many enjoyable winters in the south traveling to see much of the country, enjoying RV living and meeting many new friends. 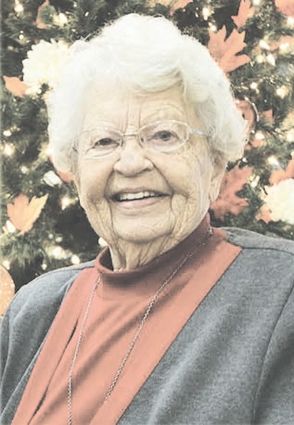 They were blessed to meet and get acquainted with most people in a campground with each and every move. They were rich with friends.

Marilyn is survived by her daughter Terry (Ron) Vore and son Ken (Jan) Denzin, all of Sundance; four grandchildren and nine great grandchildren; many nieces and nephews and friends. She was preceded in death by her husband Don, sister Virginia Furhman and parents DeWitt and Wilma Malvin.

A memorial service will held at 2 p.m. on June 21, 2019, at the Sundance United Methodist Church.