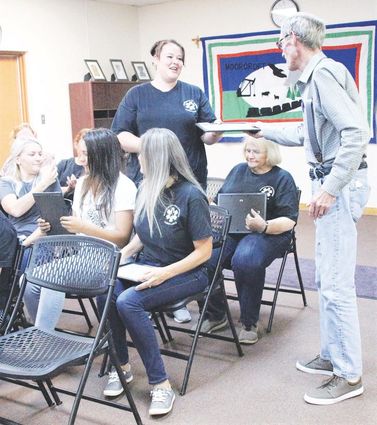 At Monday night's meeting, Moorcroft Police Officer Jory Tadlock and Ambulance volunteers Rusty Williams, Denene Humphries, Dorothy Baron, Jessica Schnabel and Andrea Pfeil received commendation and plaques, presented by Mayor Dick Claar, for their assistance with the delivery of a baby on the side of the road this spring.

On May 20, at 11:08 p.m. a new life pushed her way into the world on her way to the hospital in Gillette. The baby girl, her name unknown, was delivered by her father on the side of I-90 near mile marker 152 heading west.

Officer Jory Tadlock was first on scene just as the youngster left the warmth of her mother's body; a first for Tadlock, he later said that he was both excited and a bit scared for this little girl and her mom.

"You're on the side of the interstate and it's cold out; there's no real way to get the baby covered up and the mom is obviously losing blood," he said.

"My priority was to make sure baby was okay and I remember taking my pinkie finger and just putting it in the baby's mouth to get all the stuff out and to open up the airway. I immediately took the blanket they had and wrapped the baby and covered up the mother because she had started to shake; my fear at that point was that she was going to go into shock."

Tadlock called for a Campbell County interception to meet and treat mother and baby, "mainly because of the possibility of shock". Moorcroft Ambulance responded as well and was on scene within moments.

Williamson lifted the mother onto the stretcher and the newborn was taken into the ambulance to be checked and further cared for. Momma and baby were quickly transported on to their destination in Gillette with Dad following.

The group also received commendation and a "Stork" pin from the state recognizing their part in the delivery.