Margaret was born March 14, 1922, to Thomas and Nellie (Knight) French in Hertford, England. At the age of 14 Margaret went to work as a nanny and maid, she also helped her older sister take care of her siblings.

Margaret married Leonard Wales in Essendon, England and to this union four children were born, Pam and Jackie in Hatfield, England and Terry and Sue in Rapid City, South Dakota.

The family immigrated to the United States on February 20, 1950. They settled in the Piedmont and Black Hawk areas going into the dairy business with Dick and Vio Courchaine. Margaret and Leonard moved to Beulah in 1956.

Margaret loved gardening, cooking, canning and baking. She was always ready to give you a cup of English tea and some homemade dessert.

Margaret loved celebrating Christmas with all her family at her home, where extras were always welcome. She always did a lot of knitting for her children, grandchildren and great-grandchildren. 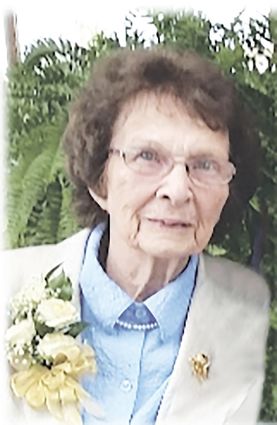 She was preceded in death by her husband, Leonard; her parents; sister, Kath Walker; brother, Sonny French; and son-in-law, Jerry Crago.

She will be greatly missed by her family and friends.