Karen Mae (Harms) Cooper has gone to be with her husband James Cooper and her daughter Lori (Cooper) Newlin in heaven on September 3, 2019. Karen was born on November 9, 1941, to Martin and Thelma Harms in Redfield, South Dakota.

She attended school in a one-room country school through eighth grade and graduated from Redfield High School in 1959. She was active in 4-H and a farm girl at heart. She was the oldest of four children: sister, Devonna (Milton) Newman of Mina Lake, South Dakota, brother, Doyle (Mickey) Harms of Redfield and sister, Annabel Lange of Andover, Minnesota.

Christmas was Karen’s favorite time of year with handmade candies and Christmas Eve buffet fit for THE KING! She won the Christmas Town Lighting several years, adding one more piece for Jay to put up each year. Halloween was another special time of year when she made hundreds of homemade treats and sometimes asked for tricks for the treats.

Karen was a candy striper in high school and was a CNA in Sundance for a couple of years. She was the town’s seamstress, sewing more than a few prom dresses, wedding dresses and alterations. She also did ironing and provided day care for 43 years, helping to raise a lot of kids in this small town. 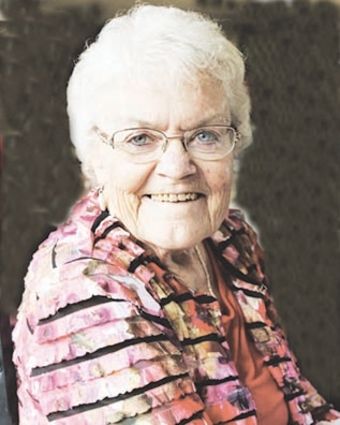 She was the town baker of decorated cakes, candies and cookies. She was the butcher of all Jim’s hunting meat. Karen was not a real community involved person; instead she followed her kids and grandkids to ball games and all school activities. She was “Grandma” to many kids she babysat. She enjoyed gardening, cooking and baking.

The family appreciates Arna and Vernon Montgomery and families, and Jeff, Darice and Lane Hodge for helping look after Karen and supporting her family.

Cremation has taken place and a memorial service will be held a later date this fall.