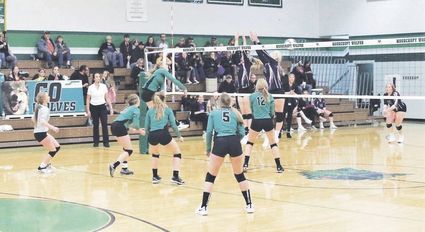 The Lady Wolves had an amazing performance at the NE Regional Tournament over the weekend. The Wolves started out strong, upset the #2 seed Glenrock and got the sweep in three sets, Moorcroft 3 Glenrock 0 (25-11, 25-22, 25-19).

Saturday, the Wolves played against #2 ranked in the state, Sundance. This match determined who would make it to the state tournament.

For the weekend, Char Cranston had a standout performance at the net, she had 51 kills at the regional tournament in the three matches; Lizzie Peterson had 30 kills for the weekend; Kailee Gill had 116 assists; Kailee also played great defense against Sundance with 19 digs; Talissa Fischbach had ten digs against Sundance, playing scrappy defense in the back row; and Tianne Fischbach had six aces against Glenrock.

I am incredibly proud of how the Lady Wolves stepped up this weekend. We won a regional match and several sets, something that hasn’t been done in years.

This group of young ladies worked together as a team and overcame challenges all season to get to where we are today. We ended the season 15-11, which is the best record Moorcroft Volleyball has seen in a while.

We had a winning season. We played team volleyball, played with heart and we played the best we have ever played at the regional tournament and that is about all you can ask for as a coach.

We will be missing our seniors April Miller and Lizzie Peterson next year. We have a bright future as a team, as this team is very young. I am very excited to see the future of Moorcroft Volleyball, and was very impressed with our success this volleyball season.