Delcie Millicent (Ferrell) Russell, 92, Aladdin, Wyoming, died Saturday November 9, 2019 at the Crook County Memorial Hospital in Sundance from complications related to lung cancer. She lived at her ranch north of Aladdin until the Wednesday preceding her death.

She was known to all as Milly. She was surrounded by loving family members and had the opportunity to say good bye to her loved ones moments before she chose to peacefully pass on. She will be missed by all who knew and loved her.

There will be no services held, at this time. A memorial service celebrating Milly’s life will be scheduled at a later date at the United Methodist Church in Belle Fourche, South Dakota. Her ashes will be buried with her beloved husband Warren Thomas Ferrell at the Black Hills National Cemetery near Sturgis, South Dakota.

Born in Laramie, Wyoming, August 11, 1927 to William Wilson Jr. and Delcie (LaPash) Wilson, she grew up on a ranch close to Laramie as well as a home in Laramie. Her grandmother, Beulah LaPash, had a ranch east of Laramie on 32 sections of land.

Her great grandparents, the Richardsons, were well respected residents of Albany County, where they settled in 1874. She, along with her two brothers and sister, were raised by her Grandmother Beulah after her mother passed away.

She graduated from high school in Laramie in 1945. Her siblings preceded her in death.

She later married Leo Gilbert Russell (World War II Army veteran) February 1980 from Spearfish, South Dakota. Leo was postmaster in Spearfish for many years and locally known as “Cowboy”. They lived in Sundance and later moved to the ranch north of Aladdin. Leo passed away September 14, 1992.

Milly worked as a clerk for the Crook County Justice of the Peace for many years with J.P. Ron Waugh. She always had money for the grandchildren in her desk so they could buy a pop.

She lived on her ranch near Aladdin, Wyo. for many years. During her time at her ranch she enjoyed Aladdin Home Makers Club, watching her grand and great grandchildren play sports, her pets, watching wildlife, feeding her wild birds and squirrels, attending the United Methodist Church and bowling in Belle Fourche, visiting her many friends and neighbors, children, grand and great grandchildren, many relatives all who greatly enjoyed their time at the ranch. She also enjoyed golf, bridge, swimming, quilting, square dancing, church activities and traveling.

She was so busy that her siblings said her middle name was “Go”. Her philosophy in life was to “wake up early, because you can get more done”.

She was preceded in death by her husband Warren T. Ferrell; her husband Leo G. Russell; her brother Elmer Wilson; her sister Ethyl Talbert; her brother Lewis Wilson; and her grandson Jeremy Ferrell.

Memorial contributions may be made to Crook County Memorial Hospital in Sundance. 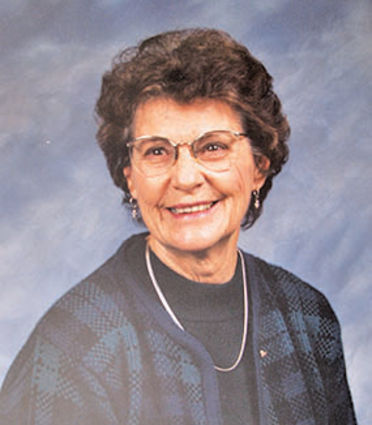