By Angie Peters and Allison VerBurg

How do you spell that?

Moorcroft K8 Parent Advisory hosted the annual Crook County District Spelling Bee, where more than 70 Moorcroft K-8 students gathered, on Tuesday, February 11 for a school-wide spelling competition.  To prepare for this event, during the month of January, Moorcroft K8 held classroom spelling bees and the top spellers from each classroom advanced to the Crook County District Spelling Bee, which was divided into two divisions, first through third grade and fourth through eighth.

Words such as remarkable, earthquake, tissue and reasonable were spelled by our first to third graders and apprentice, pamphlet, abundance and contaminate were spelled by our fourth through eighth graders. All students did a wonderful job and tried their hardest to spell each word correctly. Through seven rounds, the winners of each grade were decided. 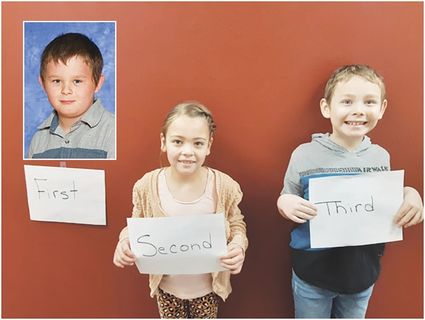 The top three winners will represent our district in the State Spelling Bee in Rock Springs, WY on March 28, 2020.

The Scripps National Spelling Bee is about much more than spelling, word origins and correct pronunciation. It’s about inspiring confidence and a love of language that lasts a lifetime.

The Scripps National Spelling Bee is a tradition that began in 1925 with the vision of supporting eager and enthusiastic spellers. Every year, we watch in awe as spellers take the stage and spell their words confidently and calmly. We recognize the determined look in their eye or the nervous tilt of their head, and we are there, cheering them on with every letter they say.