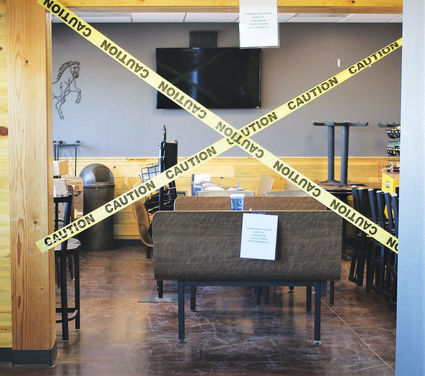 When COVID-19 entered Wyoming earlier this month, people did not fathom the measures that would be taken and their reactions. Moorcroft and Pine Haven have not been left untouched by these changes, but are working hard to adapt and continue serving citizens.

Coffee Cup manager Toni Kornimann reports a drop in customers over the last two weeks. Due to the health order barring any eating establishment open for the public to congregate, The Cup has removed all seating in the food court and has removed the soup, cup lids and condiments from public access.

Long-time employee Dianna Svalina said of the changes, “Everything’s changed. You can’t put out uncovered food, if you handle money, you can’t work with the food, if you handle food, you can’t work with the money. Customers can’t bring their own cup in any more to get a refill; truckers can’t bring in their thermoses anymore to get refills – even though people aren’t reading the signs and are still trying.”

Tony Paris, manger of Caribou Coffee, has instituted safety protocol based on the advice of the state: “It’s a little confusing right now because I’m still waiting to hear back from Corporate.” He notes, “It’s gotten quieter, slowing down.”

His associate, Desa Williamson added that working at the coffee kiosk is different now thanks to, “having to have two people per shift, one person working the register and one making the drinks.”

Because of the current ban on restaurant style eating, Donna’s Diner owner Kellie Donahue reports a change in their hours, the kitchen is open at 7 a.m. until 3 p.m. for takeout and senior delivery orders only. Donahue says that this issue has greatly impacted their business.

“We are only making about a fifth of our income – not enough to pay the bills, but we gave all of our employees their hours just so that they had something.” She added, “We’re going day by day.”

Paradise Foods manager Lisa Griffith reports that they have hung flyers on the doors telling customers not to enter if they are not feeling well with the option of ordering via the store’s phone number.

“We will either deliver to their car or we have been delivering to residents of Pine Haven just to keep the spread down,” Griffith says. They have been washing all the carts, case and cooler doors as well as the counters and credit card machines several times a day with bleach water.

Regarding the difficulty keeping the shelves stocked, Griffith admits the store has experienced many “outs” and allocations from their distribution warehouse for milk, flour, sugar, eggs and toilet paper.

“To begin with, we thought it would just last a week or two, but I’m guessing we’re probably four to six weeks before people settle down. We’re still seeing some panic buying,” she says.

The store have put limits of one per customer of the aforementioned products because of the slower than usual restocking issue. “Just so everybody in the community can get some. They are slowly getting a little better, with every truck, we get a little more in”. Otherwise, we’re just trying to hang in there.” She says that she has not noticed any decline in customers because of the shift in protocol.

Diehl’s Supermarket owner Emanuel Chaffee speaks candidly about the changes to how he’s doing business. He has added several new employees due to the extra supply trucks and heavier flow of customers.

“Everyone’s working a lot of overtime hours so we’re trying to break that up so we can continue long term,” he says.

Chaffee is ordering all week to keep the shelves stocked: “It is a 24 hour job for me to find supplies through different suppliers. I’m getting trucks from three different suppliers and right now I get a truck on Sunday, Tuesday, Thursday and Friday.”

He has changed store hours to open at 7 a.m. for seniors only to buy the items they need without being overwhelmed by the general public, “For the most part, everyone’s respecting that as far as I can see,” and closing at 6 p.m. to allow staff time to restock. “They came in at 6 p.m. and work until midnight restocking, Thursday, they got the truck put out so we didn’t have to mess with it during store hours.”

His people are adhering to safety protocol regarding separation of money handling and food handling, wearing gloves and sanitizing surfaces multiple times a day.

Speaking to the eventual conclusion of this situation, Chaffee says, “I see it coming more to a sudden than a gradual halt and we will have a lot of inventory because, at this point, I’m ordering numbers I have never ordered before just so we don’t run out. My hunch is that if we keep food on the shelves, people will realize that we’re not going to run out and they will stop panic buying.”

Chaffee figures that this event will have long term consequences, with businesses remaining closed for perhaps months. “This is affecting everybody and we’re not going to go back to normal, there is going to be a new normal,” he says.

He held, though, that there is nothing to fear, because, “everything changes, this was just a drastic change quickly that a lot of people don’t know how to react to.”

He asks that people respect their neighbor’s needs and not just buy up everything, but notes of local residents, “For the most part, they do a really good job here compared to some other places.”

Moorcroft Senior Center volunteer Mary Joselyn tells people that the Moorcroft Senior Center like so many other recreational establishments including the library is closed, but she is manning the office from 8:30 a.m. until 12:30 p.m. Monday through Thursday, calling folks to make sure they are well and have everything they need.

Joselyn is pleased to inform people that Crook County Senior Services have reached out and is assisting the Moorcroft center – “We have our van back” – and she is delivering meals from Donna’s Diner to local residents. The center, Joselyn assures seniors, will retain the use of the van after the current restrictions are lifted.

Those who want meals delivered at this time may call Donna’s and ask for delivery, the restaurant will then provide Joselyn with the address. She does not enter anyone’s home; she will knock and leave the meal at the door.

Joselyn advises her neighbors, “We all need to take our precautions that have been given to us and this, too, shall pass. Be safe.”

Moorcroft Post Office supervisor Kim Watson explains that the postal service personnel is considered essential, meaning that the postal service is part of the critical infrastructure of the nation; the employees are providing an essential public service of the federal government to the American people and are exempt to any state or local closures.

With this exemption in mind, the small crew are diligent about maintaining their protocol, “We go out and wash door handles, counter tops and anything else the public touches, once in the morning and once in the afternoon and the credit card machines are cleaned almost after every transaction. We have latex gloves for delivering mail and make sure no one is sick here.”

Signs are prominently displayed advising individuals to maintain a six foot distance between themselves and others. For instance, Watson explained, “If someone’s at the counter, then someone else has to stand back at least six feet behind them.” If the first individual uses the credit card machine, the machine is immediately wiped with a bleach wipe to ensure the next customer does not make contact with the previous person’s germs.”

She noted that there has not been a drop in customers at the Post Office, “Mail is very important to people, it is a constant in their lives.”

“I think this coronavirus is like a lot of other viruses, it’s going to have its spew and then it’s going to disappear.” Watson advises neighbors to use common sense, not be hoarders and stay safe until this one ends its reign of terror as well. “We will get through this.”

Moorcroft and Pine Haven Town clerks Cheryl Schneider and Marilyn Jensen report the offices are closed to the public at this time. Payments can be deposited in the secure drop boxes and they are accepting phone calls.

Public works are continuing with necessary work around the municipality with the normal separation between the crew and the public.

Moorcroft Chief of Police Doug Lundborg discusses how the town’s police department is protecting itself: “I have purchased non touch thermometers. They will be used when dealing with individuals in close proximity. They plug into our phones. We are also using hand sanitizer and gloves when touching any surface that could contain the virus and have purchased some masks with more on order. Our best defense is the six foot rule on distance when possible.”

Lundborg reports that Crook County Attorney Joe Baron has sent over orders to be followed by all businesses and they have been compliant “as far as we know”. 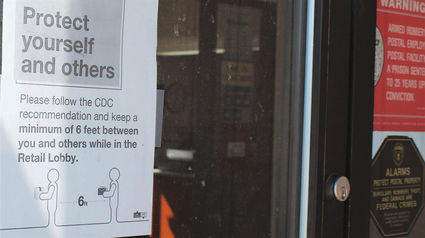 Due to the unusual circumstances, arrests are down and officers are making every attempt to not arrest individuals if possible.  The sheriff’s department is following the same considerations. If able, they will cite (write a ticket) if at all possible. “So catch and release is the rule of the day...”

The chief has been sharing updates with the officers and the governing body and is in contact with Public Health and County Emergency Manager Ed Robinson as the situation progresses.

Lundborg asks people to contact him with any questions or concerns.

The people residing and doing business in this area are known for stubbornness and resilience and are showing themselves well as both traits tide neighbors through these difficult days.

If your business has instituted changes due to the outbreak and you would like us share that information with the public, please let us know.