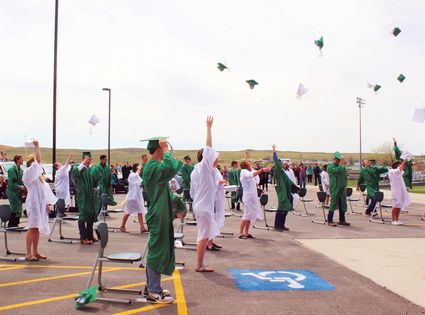 After an unprecedented senior year, the class of 2020 made the best of an equally unprecedented graduation last Sunday afternoon.

The 32 graduates, Crook County School District #1 Board members, superintendent, MHS principal and supporting staff conducted the ceremony on the south parking area of the high school in wind gusts of up to 22 miles per hour, according to The Weather Channel.

Guests arrived and congregated together to catch up and settle in for the event. Chairs were placed at the required six foot intervals in front of the stage and literally everything that could fly was clipped or tied, including stage skirting and speeches. A sock was wrapped around the microphone to control wind interference as orators spoke and everybody held on to their hats.

Undaunted by the blustery conditions, Class President Kaylei Petz spoke with enthusiasm as she welcomed the graduates followed by Salutatorians Payton Timberman and Amanda Otto as each spoke of the future. Valedictorian Parker Seeley then stepped onto the stage in sunglasses and boots as he addressed his former classmates, saying goodbye to this time of their lives.

Immediately after the ceremony, the newly minted adults jumped into their previously decorated vehicles and made the parade route along Big Horn Avenue (Main Street) to the whistles and calls of fans of both the graduates and a parade.

Many others are continuing their formal education in the medical field, RiLee Bonaguidi is attending the University of New Mexico seeking a diploma in nursing; Erica Charlson is becoming a certified nursing assistant; Charmayne DeLong is traveling to Indiana Tech for her degree in sports medicine; Mika Herrera, Casper College – nursing/radiology; and Aric Homola, Casper College – paramedic program.