Nadine Joy Thompson age 94, went home to be with Jesus on April 6, 2020 after a short stay at the Montana Veterans Home in Columbia Falls and thankfully her daughters were able to spend the last few days with her in spite of the COVID-19 restrictions.

Nadine was born on a homestead new Carlisle, Wyoming on June 5, 1925 to Cash (Cassius) and Babe (Beatrice Bros) Minnich.  She and her sister Coralie were raised in Moorcroft, WY where she graduated from high school.

Working at a local café, Mom met her one and only love, George N Thompson. They were married on February 23, 1943, while Dad was on leave from the Army Air Corps then once he was “honorably” discharged from the Service, they moved to the Wagonhammer Ranch in Wyoming where she was the camp cook and George was the ranch foreman.

They later moved to Montana, where she worked as a telephone operator and supervisor for many years in Kalispell. Working a full-time job and raising five children, she still had time to work in her flower garden, was a voracious reader, and loved music. She played the accordion and the piano, often accompanying herself as she sang.

In 1980, the telephone company offered Mom a promotion, but it would involve moving.  With all the kids gone, Mom and Dad jumped at the opportunity and moved to Alaska.  They lived in Anchorage for several years enjoying all the splendors of Alaska, especially fishing for halibut and salmon in the Gulf of Alaska.

Once both Mom and Dad retired, they bought a motor home and became “snowbirds,” spending winters in the south and the summers in either Montana or Alaska. 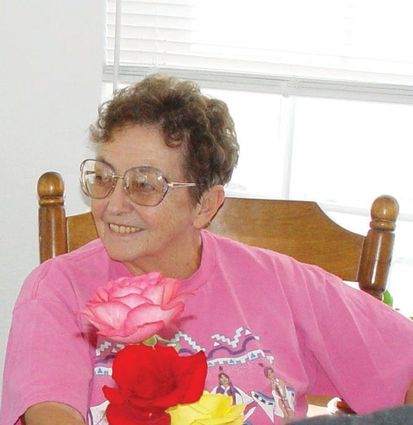 Mom had a stroke in early 1990s and lost the sight in her right eye then later lost sight in the left eye due to macular degeneration. Mom loved Jesus and often read the Bible, but once she lost her sight, she was able to listen to recorded sermons and audio books of the Bible.

She was preceded in death by her husband George; son Terry; and a stillborn son, Steven Michael; her sister Coralie; granddaughter Tori Brown; and other extended family members.

Friends are encouraged to visit our website at http://www.buffalohillfh.com to leave notes of condolences for the family. COVID-19 Restrictions will be in place.