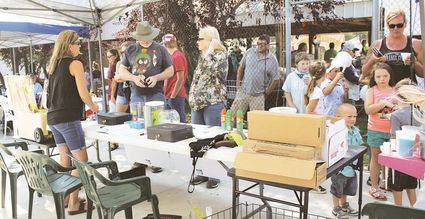 According to co-organizer Sharon Coleman, the original 500 tickets for dinner and the raffle were sold out before the grills were hot and they had to sell extra tickets for the meal alone without access to the draw. “This is the first year we’ve sold every ticket so now we’re down to selling just extra tickets for food, not the raffle.”

The 230 pounds of walleye as well as the hamburger, hotdogs, coleslaw, many salads, hushpuppies and chips were served until everything was gone. Lang was pleased to report that all supplies for the dinner were purchased locally.

There were 16 items donated for the silent auction this year, double the contributions from last year. Among these was a hard side ice fishing shack, built by BDM Construction who happened to be in town building a custom garage; gravel dumps; and a six-week-old female Labrador mix puppy.

Proceeds from one of the large collections on auction, according to Lang, were specifically tagged for the Pine Haven Voluntary Fire Department. Coleman later reported that the basket for the fire department raised $3940.

Also donated were many fishing poles, tackle boxes and scooters for the youngsters’ free raffle. As grills heated up, people perused the raffle prizes and wrote their bids for the auction items before finding their seats.

Coleman smiled as she later said, “[This was] our biggest turn out ever, we served over 700 meals. ‘Crazy fun!”

The NEWWA group usually hosts fishing classes for Crook County fifth graders every summer with proceeds from this event, but could not offer the educational experience this season due to Covid 19; the group plans to conduct a two-day event next year for both fifth and sixth graders as this year’s fifth graders missed out.

The organization also hosts fishing tournaments in the spring and fall and, while the spring event was cancelled, the October tournament is still on schedule. This event and the tournaments also provide two scholarships for Crook County seniors every year.