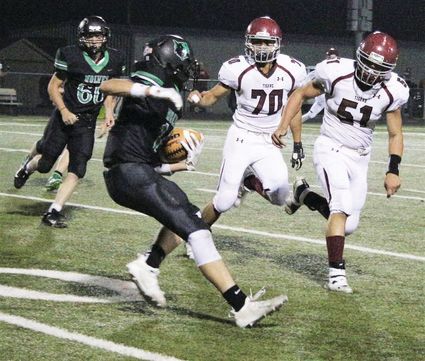 On Friday evening, the 2-0 Moorcroft Wolves welcomed the 2-0 Lusk Tigers to town for a battle of the undefeated teams.

The first quarter was a struggle for both teams as Lusk fumbled the ball on a number of occasions and Moorcroft could not capitalize off the turnovers, which resulted in a tie ball game after one quarter.

In the second quarter, the Tigers were able to find the end-zone a few times through the running game and Moorcroft punched it in on a short run by Hunter Garoutte, resulting in a halftime score of 26-8 Tigers.

Lusk continued their run-dominant offense into the second half. The final score of the game was 56-8 as the Wolves could not find a way to slow down the Tigers’ run offense. Moorcroft had 43 passing yards and 100 yards rushing for the evening.

Next, the Wolves will travel to Wright as they look to get back in the win column.