Graveside services will be held at 1 p.m. Friday, November 20, 2020 at Mount Pisgah Cemetery in Gillette, Wyoming. Family and friends may call at cemetery chapel for a viewing from 12 noon to 1 p.m.

A celebration of life will be held the summer of 2021 at Keyhole Reservoir.

Kenny was born on Wednesday, April 30, 1930 in Gillette, Wyoming to Edward Eckdahl and Marguerite (Lowrey) Burr. Kenny was raised and educated in Rozet, Wyoming.

Kenny worked for Knisely-Moore Construction and was proud to say he helped build Keyhole Dam in the 1950’s, he also worked for True Oil, was a rancher on Buffalo Creek south of Upton, Wyoming and in his later years, he served as a camp host at Keyhole, retiring at age 88.

Kenny was a pilot, loved to ride motorcycles, had a love of the outdoors and spent his summers at Keyhole camping, boating, fishing, waterskiing and spending time with family and friends. His love of music included dancing (until his legs no longer allowed it) and playing the harmonica.

He played at the Moorcroft Senior Center every Wednesday and traveled to senior living facilities in surrounding towns, sharing his love of music. He spent many winters in Arizona. He was one heck of a storyteller and always kept everyone wondering, “is this one true”! 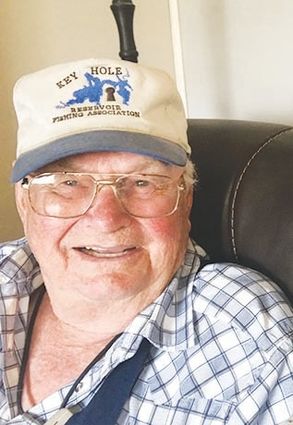 In lieu of flowers the family would appreciate memorials to the Moorcroft Senior Center. P.O. Box 591, Moorcroft, Wyoming 82721.

The Gorman Funeral Homes – Converse Chapel of Douglas, Wyoming is in charge of the arrangements.

Condolences may be sent to the family at http://www.gormanfh.com