She was born December 6, 1924, to Ed and Edna Manke on the “home” place on Left Creek. She was the youngest member of her family. Marion was born and lived in the same house except for six years of her life.

Marion finished eighth grade. She started working at the age of 15 for different families in Crook County doing various jobs such as cooking, cleaning and taking care of children.

Errett was in the service their first two years of marriage. Errett was discharged in 1944. They worked on various ranches in Crook County until they purchased the Manke “home” place in 1948. Marion lived and worked hard on the place until she moved into the Crook County Nursing Home in the early spring of 2018.

Marion was very active in 4-H as the cooking instructor for the 4-H students. She was a cook at Mallo 4-H Camp for many years. Marion loved to cook and bake.

She was a lifetime member of the Carlile Livewires. In 2002, she was Grand Marshall of the Crook County Parade.

Marion and Errett took many fishing trips around the area. She liked to travel and visit her sisters in Florida and Texas.

Marion always had a big garden as long as she was able to take care of the garden. She enjoyed playing cards at the Y. She worked in the R H Greenhouse every spring, enjoying all flowers. Most of all, she loved her black cows and calves. 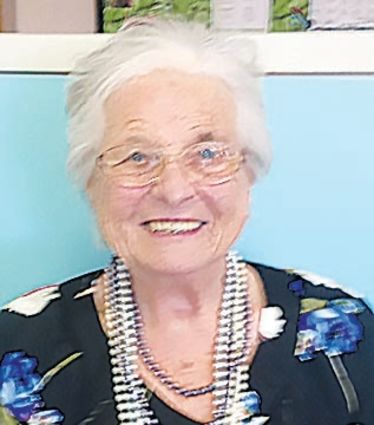 She was preceded in death by her husband, Errett Haptonstall; her parents; three sisters, Emeline Clark, Viola Miles and Myrtle Simms; two brothers, Albert and Richard Manke; and one great-grandson, Isaac Haptonstall of Casper.

Services will be held Friday, December 4, 2020, at the Oshoto Community Church at 2 p.m. with burial following at the Pine Grove Cemetery. Memorials have been established to the Oshoto Church or Pine Ridge Church.