Violet Courchaine, 96 of Beulah, Wyoming, died Thursday, December 10, 2020, at Crook County Memorial Nursing Home. Due to the COVID-19 Pandemic and for the safety of the community, the family has chosen to have private services for Violet, which were held on Tuesday, December 15, 2020 with burial following at Black Hills National Cemetery.

Violet was born to Thomas and Nellie Knight French in Hertford, England on February 24, 1924. At age seven, her mother passed away and she was raised by her father and extended family.

This experience changed her life in that she kept family close and, when she became a mother, she was a strong and loving mother to everyone. Through her life she has had many friends that have become family.

During World War II, she met Richard “Dick” P. Courchaine. As the war progressed, she worked as a farmer at a POW camp with German and Italian soldiers.

After the war she wrote to Dick’s platoon and, when asked why she chose Dick, she said, “He was the only one who came back for me.” After many letters were exchanged, Violet and Dick were married in Hertford on April 4, 1946.

Upon return to America, Violet and Dick settled for a short time in California, where their first child, Bonnie, was born. From there they moved to Big Hole Country in Montana, where Dick took Violet and Bonnie to a cabin on the Brenner Ranch, 70 miles from the nearest town. There Violet saw her first moose and wanted to immediately return to England, but Dick convinced her to stay.

On the ranch, she was the cook for hired hands and taught herself to drive. While learning to drive, the car got a flat tire and she drove back to the cabin on it and told Dick, “Who says you can’t drive on a flat tire?”

In 1949, Violet, Dick and Bonnie returned to England and convinced her sister Margaret and family to come back to the USA to become dairy farmers in Black Hawk, South Dakota. While in Black Hawk, another daughter, Wendy was born.

In 1954, they moved to Beulah to open their own dairy farm. It was a busy time for Violet, she cleaned the dairy barn twice a day winning many awards for Grade A milk, cooked for all the hired men and had two more children, Kelly and Rocky. 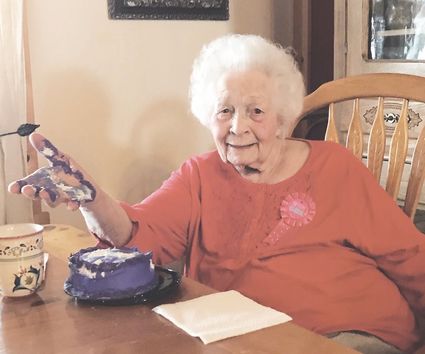 Violet is preceded in death by her husband of 60 years, Dick; two sisters, Kath Walker and Margaret Wales; and one brother, Thomas Sonny French.

As the matriarch of the family, Violet will be greatly missed.

Arrangements are under the care of Fidler-Roberts & Isburg Funeral Chapel of Sundance, Wyoming. Online condolences may be written at http://www.fidler-isburgfuneralchapels.com.