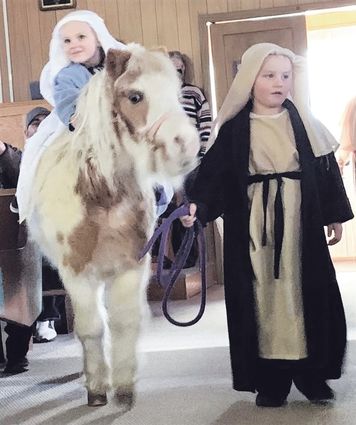 Old Paint, owned by Voy Cox, carried Mary (Chevell Renneisen) to the stable to have the baby Jesus and Joseph (Alek Renneisen) led Old Paint and knocked on pews, asking, “Do you have any rooms?” as Pastor Monte Reichenberg told the story.

Seven angels came out as Mary Beth Percifield sang “Hark the Harold Angels” and two shepherds (Cadin Cantu and Ryder Gray) with their little sheep (Giada Gray) snuck out into the isle to sleep.

After baby Jesus was born, the angels woke the shepherds and told them to go see the baby. Then, the three wise men (Lynsey Gray, Coy Hoppes. and Cole Cantu) followed the angel and star carried by Charlene Huckins to the stable, bringing gifts for the baby. The program concluded with all the kids singing “We Wish You a Merry Christmas”.