Catching trash at the Moorcroft landfill 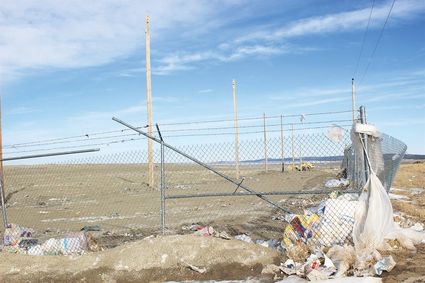 Powder River Energy recently donated several poles to Moorcroft that will be used at the landfill to hold the ten- or 12-foot high netting intended to mitigate the flying debris currently contaminating the surrounding ranchland. The existing fence cannot contain the airborne garbage and this is one of the answers, along with crews hired to pick up a radius around the landfill periodically.

When the DEQ inspected Moorcroft’s solid waste facility last year, their reaction to the condition of the site was “scathing” both verbally and in the subsequent written reprimand, according to Mayor Dick Claar at the time.

“They thought we should do a better job… they gave us the impression that if we didn’t do better, they wouldn’t give us any more [expansion] permits,” he said.

The town fixed the compactor and lessened the open face of the vertical expansion, better controlling trash right away. The implementation of a simple catch system around the area was the next step advised by the agency.

The poles have been installed and Public Works Director Cory Allison has ordered the netting, he anticipates receiving the material within the next three or four weeks. The town’s crew will then complete the “screens” around the working area to “try to catch the plastic bags from blowing around [and] the trash from blowing over the fence and in the field.”