Coming out of the cold 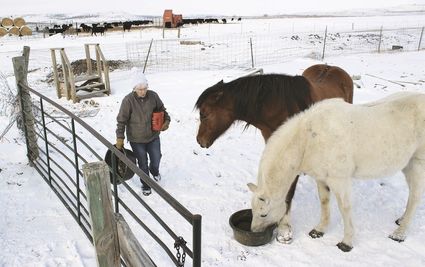 As Crook County and the surrounding area finally escapes the clutches of the bitterly cold temperatures of the last two weeks that originated at the Arctic, the subsequent 0-20 above of this week seems positively balmy.

Like others who are responsible for animals in the pastures, local rancher Rosalie Brimmer (pictured above) comments on feeding her horses through the cold and terrible wind chill, “It makes it miserable [and]hard on livestock.” She said that her animals have “some” protection from the bitter cold in old buildings around the ranch and she wants to build more wind breaks in the future.

Brimmer expressed her appreciation for the warmer weather this week, allowing her the comfort of working without the “terrible wind”.

According to the National Weather Service, this cold snap resulted in record-breaking lows throughout the region. Among those broken was Devils Tower; in February 2007 that community had a low of -20 degrees, their new record is -29 degrees.