Whitcomb FFA members have been busy all year long preparing for one event…2021 Wyoming FFA State Convention! Some of our teams started practicing the second week of the school year.

We have had a few good practice contests like the Laramie County Community College Horse Judging Contest, in which the team took first place and they were in the top 5 individuals coached by Mrs. Sharron Bailey. So with that success and momentum our chapter took the challenge to do better than we have ever done at State Convention.

This year we were unable to have a “normal” week-long convention. Rather it was divided up in various contests throughout the state on different days.

Our fist contest was in Torrington, where the first-time Vet Science Team, coached by our local vet Aubry Turnbough, and our Ag Mechanics team competed. Next came the Conduct of Chapter Meetings team (novice parliamentary procedures) in Douglas.

The students did an amazing job with their contest card and were a joy to coach. Casper Contest was next with the Meats Team competing for the very first time as a team and placing 11th in the state.

Finally, our year rounded off with a bang in Cheyenne where our Horse Evaluation and Livestock Judging teams competed. We also found out how our teams did at the two general sessions held at the Archer Event Center. 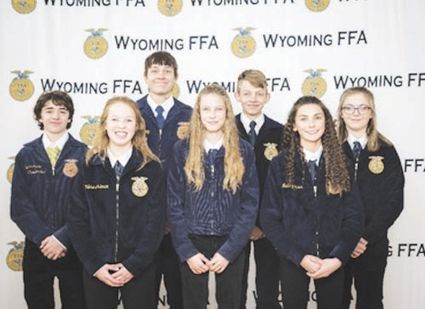 Payton Timberman, a former member of the Whitcomb FFA, represented us as the State FFA Association. The Second Vice President gave a remarkable retiring address and took his FFA Jacket off for the last time.

Our members met the goal this year and I am proud to say that we brought home some ribbons. Anna Bossman received a Gold for her Sheep Production SAE, the Horse Evaluation Team placed third in reasons and sixth in state.

The Ag Mechanics team placed third overall, and our officers put together a chapter award application in which we were awarded a two-star chapter, not bad for a COVID year.

I would like to thank all of our coaches and supporters for your fire, diligence and skills that took our CDE & LDE teams to the next level. We wouldn’t be here without you and Mr. Jenkins would have a lot less hair! Thank you all once again.