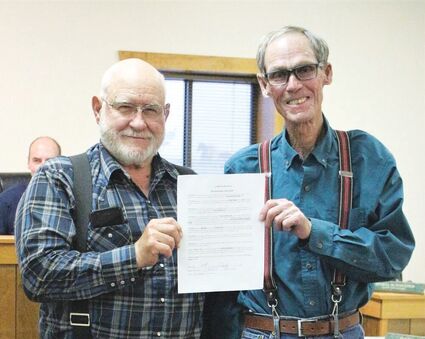 Monty Reichenberg stands with Mayor Dick Claar as the written proclamation taking action against hunger in the community is officially adopted.

A proclamation honoring Hunger Action Month was read aloud by Moorcroft Mayor Dick Claar at Monday night's meeting of council. Moorcroft Interfaith Community (MICC) member Monty Reichenberg, who, with many others, has been on the front lines helping distribute food locally, attended to hear this announcement from the mayor that Moorcroft will recognize and assist to alleviate the need in this area.

More than 500 people were provided with food in the south parking lot of the MTC last week, according to Reichenberg, where the town has allowed the MICC to install refrigerated units to keep foo...