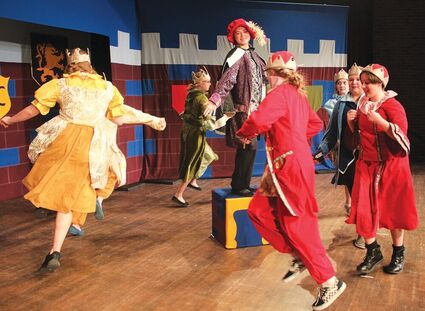 The elemental kings and queens sing Red Velvet Hat as they dance around a very mistaken Emperor.

The Moorcroft High School auditorium was the place to be Saturday afternoon as guests were entertained by the fresh energy of a local cast of the production of The Emperor's New Clothes.

This production was the most recent from the Missoula Children's Theatre, hosted by the MK-8 Parent Action Committee. Committee member Angie Peters expressed her pleasure in the efforts put forth by the Moorcroft area youth.

"Everybody's done great. We auditioned on Monday and they got their parts Monday after auditions. They learned all their lines, songs and actions in a matter of days. It's been phenome...