William "Bill" Dean Hagerman, 93 of Upton, Wyoming, passed away quietly at his home Tuesday morning with his daughter Eileen by his side.

Billy was born shortly after midnight on July 9, 1929. He was born on the family homestead on Arch Creek in Weston County, Wyoming.

His parents were Charles Mckay Hagerman, Sr. and Minnie Dorcas (Wiseman). Bill was the youngest of six siblings. Bill graduated from Upton High School in 1947.

Bill married the love of his life Pauline Gladys Murray in 1950. They fell in love when they were very young.

Pauline's parents sent her away to an all-girls school in California to keep the love birds apart. While they were separated the two wrote beautiful love letters to each other, which still survive.

As soon as Pauline was home, they eloped. They were married for 63 years, with a marriage full of love, happiness and three children. Pauline passed away in 2014.

As a young man Bill worked on his families' (then his own) ranch on the Crook/Weston County border. He then worked for Edgar Beck as a carpenter in the early 1960s.

In 1967, Bill and his good friend Bob Douglas started their own construction company and named it Hagerman and Douglas Construction. They received numerous accolades for their superior construction of homes by the company Midwestern Homes.

Bob and Bill built over 20 homes in northeast Wyoming and some businesses. When Upton was booming in the late '70s and early '80s, Bill bought properties and trailer courts, renovated them and rented them out.

He also bought a backhoe and developed the trailer courts into individual properties and later sold them. Bill spent the last 20 years as a rancher on the C-K ranch, where he started as a young man.

Bill mastered whatever he was interested in. He was an avid fisherman, a great hunter, an excellent golfer, a semi-pro at the game of pool and he painted amazing paintings in oil.

Billy won the Marksman Honor with the National Rifle Association. He became so skilled with a backhoe that people teased "he could pick his teeth with the backhoe bucket." He was adept at operating heavy equipment and farm machinery. He especially loved to run a swather.

He was good at finding arrowheads and acquired an impressive collection. Then, he taught himself how to create arrowheads using the techniques of Native Americans.

Bill served a term or two on the Upton Town Council and was instrumental in the development of the local jail, library and improvements to the local park. He was a member of the Upton Masons.

The Upton Masonic Lodge was one of the buildings that Hagerman and Douglas Construction built. He also volunteered his services in building and served as president for the Upton Golf Course. 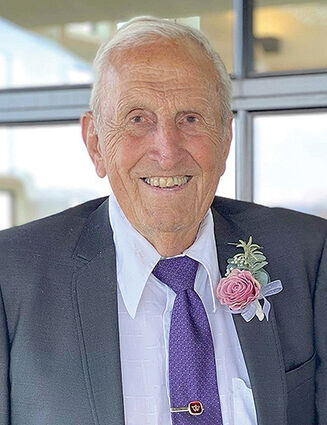 Bill was preceded in death by his wife, Pauline; his son, Lewis; his parents; and all of his siblings. Bill and Pauline's ashes will be combined and poured over a special place where they used to "neck" when they were young.