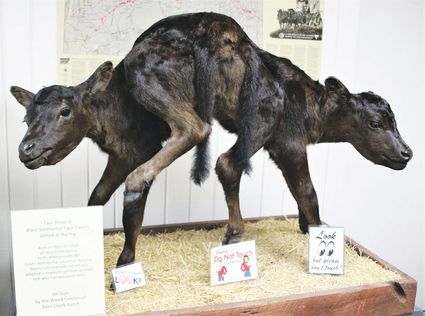 West Texas Trail Museum Director Cynthia Clonch is introducing a new exhibit at the museum. She said that when the taxidermied calves arrived, she had to consider carefully the best spot for it.

“I thought about putting it [facing the entrance] and someone said that if that’s the first thing you see, it might be too startling,” she laughs.

Ultimately she decided on the corner display behind the saddles in the front reception area.

These co-joined calves were born via cesarean section last April 15 of a Simmental cow on Deer Creek Ranch owned by local rancher Matt Wood. The calves died soon after birth; the cow, however, survived delivery to subsequently adopt a bum calf, raising it as her own, and has birthed a healthy calf without complications this year.

The vet’s explanation for the unusual occurrence was that the eggs in uterine did not separate entirely. Clonch noted, “When the taxidermist did this, he had no mold for [the conjoined pelvis] so he used a buffalo mold for the hump.”

Wood’s grandmother, Edith Shepherd, remembers a similar incident several decades ago when a cow on the same property birthed a two-headed calf that also died at birth. It is not a common occurrence.