Funeral services for Kim Rehbein, 63 of Sidney are at 10 a.m., Tuesday, December 10, 2019, at the Shepherd of the Valley Lutheran Church in Sidney with Pastor David Huskamp officiating. Interment will be in the Richland Memorial Park Cemetery, Sidney, MT under the care of the Fulkerson-Stevenson Funeral Home of Sidney. Remembrances, condolences and pictures may be shared with the family at http://www.fulkersons.com.

Picture this: a baby boy was born in Sidney, MT on May 25, 1956 to Fritz and Ann Rehbein. He was named Kim Matthew Rehbein, the fifth of eight children.

He grew up and attended school in Lambert, MT until the eleventh grade, when he moved to Ekalaka, MT where he graduated high school in 1974. After graduation, he worked various jobs in the Ekalaka area. On July 25, 1976, he met Sandra Jean Badt at the Richey Rodeo, and his life was forever changed.

He always said he had a dream of the woman he would marry, and knowing she was the one, the next week Kim moved to back to Sidney to be with Sandy. The two were married on September 10, 1977. Kim and Sandy shared many good times together in their 42 years. The two traveled many places; their favorite being Treasure Island in Las Vegas, also the site of their vow renewal on their 40th anniversary.

Kim always put his family first. Everything he did was for them.

Picture this: moved to Sidney to be with a lady, better get a job. Kim began working at Holly Sugar in September 1976. Throughout his 43 years at the sugar factory, Kim worked many different jobs starting as a fireman, and all the way up to Maintenance Manager.

Kim made many friends at the factory, and all that worked with him loved him. He led by example, stating “Never make anyone do something that you haven’t done first.”

He was practically always on call and could come fix almost anything, although it might take a trip to the factory’s junk pile, which he called “Treasure Island”! He was nicknamed Sanford, from the TV show Sanford and Son, because he saw value in everything even if it looked like junk to others, and often was able to salvage junk for parts.

Picture this: a baby girl was born on October 1, 1981, named Stacey Lynn, and another on December 3, 1986, named Lisa Michelle, to Kim and Sandy. He was a devoted dad and always made time for his girls.

During his years working shift work, he would always leave notes and correct math homework when he got home, no matter what time it was.

He was a huge Sidney Eagle, Dickinson State Blue Hawk and Richland Ranger fan. He was there to support his kids, and later his grandkids, in all their sporting and academic endeavors. He viewed many track meets through the lens of a video camera.

After living a life with all women, he was very happy when two sons-in-law entered his life. Later came two grandsons and two granddaughters.

He never deprived his grandchildren of anything. He spoiled them every chance he could.

He was always up for a game of HORSE, a game of cards, even drawing or coloring princess pictures with his granddaughters. Everything was even in the Rehbein Clan: five boys and five girls.

This past month, another grandson joined the gang, tipping the voting power to the boys. Grandpa Kim was tickled to have his little cowboy, Rhett.

Picture this: need something made, Kim will make it for you! He liked to do woodworking and household handy work in his spare time. Sandy always had projects lined up for him, and although he complained, he faithfully did his work.

Kim and Sandy had a large garden. He would faithfully plant his rows and rows of potatoes, onions, cucumbers, peppers, squash and massive amounts of tomatoes. He would plant, Sandy would weed and can, and he would finish the garden for fall.

He loved a good movie quote and could have full conversations in quotes. He would text funny things to anyone and everyone that may find his thought funny or just to say howdy. 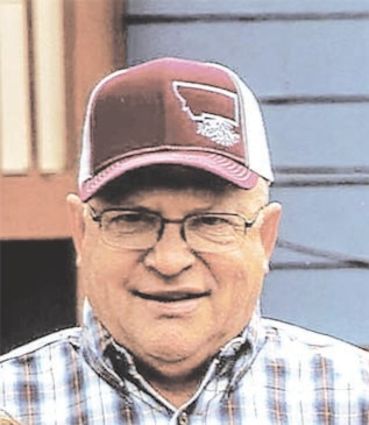 Kim passed away on November 28, 2019 after complications from a sudden heart attack and open heart surgery. He bravely waited to be with the Lord until his girls could all be together at his side.

He is survived by his faithful wife Sandy, his daughters Stacey (Justin) Collins of Sidney and their children Brady and Aiden; Lisa (Tyler) Bahm of Burlington, ND and their children, Harper, Kendri and Rhett. His father, Fritz Rehbein of Rozet, WY, brothers Kurt (Rozet, WY), Kent (Sidney, MT), and Kevin (Shelley) of Gillette, WY and sisters Kitty (Bill) of Glendive, MT, Karen (Tom) of Ekalaka, MT and Kris (Gary) of Gillette, WY and numerous nieces and nephews.

He was preceded in death by his mother, Ann Rehbein, brother Kyle Rehbein and in-laws Herman and Martha Badt.

During his final days, his only wish was to be back in Montana, his home.