Grave side services for Moorcroft resident, Marion “Eyvonne” Schuricht were on March 15 at the Moorcroft Cemetery with Fr. Cliff Jacobson officiating. Eyvonne, age 91, passed away at Legacy Living and Rehabilitation Center on March 9, 2021 in Gillette, WY from age related complications.

Eyvonne was born on April 1, 1929 to Albert and Eva (Bowden) Evans in Gillette, WY.  She grew up on the family homestead near Oshoto, WY.

Eyvonne attended school in a one room schoolhouse one mile away from the family home. She walked to school with her brothers. She went to school through the 7th grade at that school.

In the fall of 1942 Eyvonne, entered 8th grade. At the end of her 8th grade year, she had to pass the state test to get her diploma, which she did.

She started to work for the forest ranger’s wife, washing windows and cleaning in the government house where the rangers lived. In her senior year, she boarded at Dillon’s Boarding House for $30 a month and worked for Lee and Mildred Schloredt babysitting and housecleaning. There was no indoor plumbing, only outside privies.

After a honeymoon to the west coast, they lived on the family ranch where Bernard was in the ranching business with his father. She was content and happy being a homemaker and mother over many years. 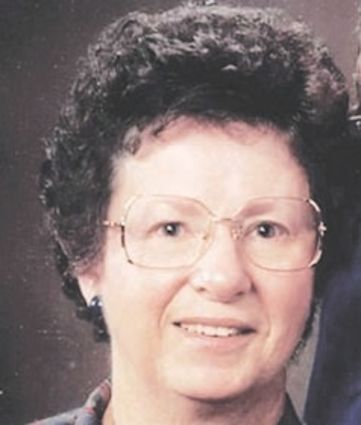 After Bernard’s death in 2001, she continued living at the family ranch until health prompted her to move to Primrose and eventually to Legacy. She enjoyed reading, cooking and baking (especially bread) and working in her yard. She was a fabulous cook.

Eyvonne was a devoted mother and grandmother. Eyvonne is survived by her children, Jim and (Linda) Schuricht, Estes Park, CO; Donna (Ralph) Clarkson of Springdale, WA; Kenneth (Cathy) Schuricht; Janet and (Don) Kinstetter of Moorcroft, WY; 12 grandchildren and 12 great grandchildren. She was preceded in death by her parents, four siblings and a grandson.