Loretta was born to George Henry and Mary Belle (Penwell) O’Haver on March 25, 1920, on the family homestead ten miles south of Sundance. She was proud to be a twin and often told the story of her dad helping with the delivery and her mother saying, “George, there’s another one coming.” Loretta and Loren Dell joined big brothers Merlin and Manford.

Loretta attended the Justice and Black’s Flat Country Schools and graduated from Sundance High School in 1938. She received her teaching permit from Spearfish Normal in 1939 and began teaching in rural schools (Hewes, Red Creek, and Horton) until 1943.

She left the one-room schools to work as a clerk at Sundance State Bank and later split her time in the Crook County Courthouse between the Treasurer and Assessor Offices. She retired from Farmers Home Administration in 1984.

Except for a short time living in Sheridan, Wyoming and Provo, Utah, Loretta called Sundance her home. She enjoyed traveling to New Zealand, Australia, Fiji, Tahiti and taking a Caribbean cruise.

She toured through Europe, Germany, France, Switzerland, England, Scotland, Wales and her ancestral home of Ireland. She and Billy spent several winters in Lake Havasu City, Arizona and enjoyed trips into Mexico.

Loretta was a charter member of the Friends of the Library and the Electa Chapter #5 Order of Eastern Star, where in May, 2011 she was honored as a 50-year member.

Many will have memories of Loretta walking to work wearing an unusual hat that she had knitted or crocheted herself. She repurposed greeting cards, adding a tatted flower bouquet or including an angel tree ornament along with a clever saying or poem.

A cup of coffee was never far as she sat in a restaurant reading a paperback book. After retirement, she felt honored to be welcomed into a special group of ladies for morning coffee.

Her afternoons were spent in the Wyoming Room of the Crook County Library indexing in her unique handwriting the Annals of Wyoming: The Wyoming History Journal and clipping articles all-things Wyoming. Summertime found her walking the golf course, and she fondly reminisced about the memories and friendships created there.

But never forget, Loretta had an opinion and was not afraid to voice it while pointing her index finger at you, and had a specific way she thought things should be done.

Loretta often said, “I only need to look around, and someone else has it worse off than me.” This philosophy carried her through three bouts with cancer, a broken ankle, wrist and both hips, the last at the age of 98, after which she amazed the medical community by walking again.

She was preceded in death by her parents, George and Mary; sister, Mary Helena in infancy; three brothers, Merlin, Manford, Loren; and husband, Billy; and notebooks full of genealogical kin she worked hours on tracing back to across the Big Pond. 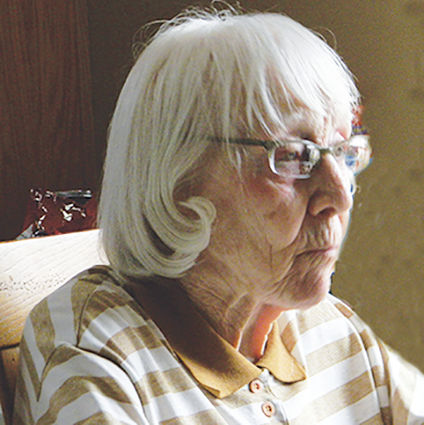 Arrangements are under the care of Isburg Funeral Home. Online condolences may be left at http://www.fidler-isburgfuneralchapels.com.

In Her Own Words

I was born into a loving family of hard-working ranchers/farmers who raised their family of four children on a dryland ranch through the Dust Bowl, the Great Depression, two World Wars and one house fire. I married a great guy and had him by my side for 65 years. I have been fortunate to have good friends.

I sure did have a good time - Thank You All.