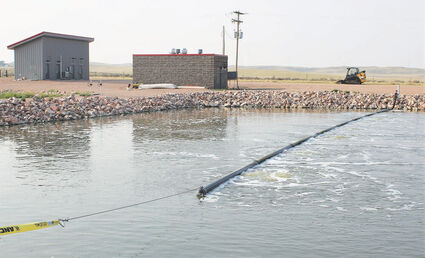 The $5 million DEQ-mandated upgrades to the Moorcroft lagoon, including training for the public works sewer management crew, is finished after more than ten months of work. RCS brought all components online a couple of weeks ago.

The site crewmen have had to learn an entirely different method of maintaining the cells, says Public Works Director Cory Allison.

“With the upgrades we had to do, there’s more stuff that we have to do out there,” he says.

This improvement, according to Moorcroft Mayor Dick Claar, “was to get into compliance with the DEQ”. However, it will take some time before tests show whether the upgrade has brought the town back in line with the agency’s standards.

“This is as good as it’s going to get,” the mayor says, addressing the possibility that this improvement will not meet standards, “Unless we go with mechanical and that costs around $10 million and $1 million a year to run it.”

The town was able to conduct the loan for this work without raising rates; if, though, this upgrade does not meet the standard set by the federal EPA, any further improvements will raise prices for water and sewer in the town of Moorcroft. Claar assures residents that the agency will “let us know if we’re out of compliance, that’s for sure.”