Her parents, Andrew and Marie, were Danish immigrants and she was one of the youngest of nine children. Ethel loved her siblings fiercely.

She attended rural schools and then graduated from Sundance High School in 1945. She was Football Queen, loved music and had a beautiful singing voice. She often sang for various events around the area.

Ethel married Edward 'Fritz' Chatfield in 1948 and they moved to the Chatfield ranch to begin their life together. One year later, their daughter Cheryl was born.

Fritz loved sheep and Ethel soon became his best hand. They worked side by side developing one of the finest flocks of Registered Rambouillet sheep in the nation, marketing their wool as far away as Peru and Japan. They were proud of the fact that Pendleton Woolen Mills even bought their wool.

Unfortunately, in 1972 Fritz was diagnosed with Multiple Sclerosis. By 1980, the disease had debilitated him to the point that they were forced to sell their livestock.

Ethel took care of him at home until he became so paralyzed that she finally had to place him in long term care in Sundance. Once he moved to town, she drove in each morning and would help him to eat breakfast, assist with morning routines and then help with lunch before she returned to the ranch. After his death in 1995, she continued to volunteer at the long term care facility until her health declined to the point she could not.

Ethel loved people and her home was often a stopping off place for a hearty meal, fresh cinnamon rolls or a piece of pie with coffee. She loved to cook and bake for others and would often deliver her lovingly made items to friends and family.

Ethel also had a deep and abiding love for God. She and Fritz became members of the Church of Christ in the 1960s and there she found a church home and faith family that would sustain her always.

She delighted in the Bible studies held around her large kitchen table. Even when her hearing was almost gone and dementia had taken many of her faculties, she would make her way into the church to greet all of her loved ones and to sing her beloved hymns as loudly as she could. She wore out several Bibles in her lifetime.

She took great pride in her family. Cheryl and her husband Terry were the light of her life, and their daughters, Brittany and Jaimee gave her inestimable joy. Later bonus children Jason and Jaelene were added to the mix and she welcomed them with warmth and love.

All who had the privilege of knowing Ethel well can attest to the fact that she was utterly unselfish, and that her sweet affection and love for others belied her incredible strength. Despite her small stature, she killed a rattlesnake with rocks because it was in her flower bed, and once used a broom to dispatch a weasel that had killed one of her chickens.

Her inner strength was demonstrated when Fritz became disabled as she learned to do many things herself. Among other things, she got her first driver's license when she was 56.

We are not saying that she was a good driver, but she did pass the test and drove back and forth from the ranch for many years. It was said that she only drove one speed; too slow for the open road but way too fast for in town. 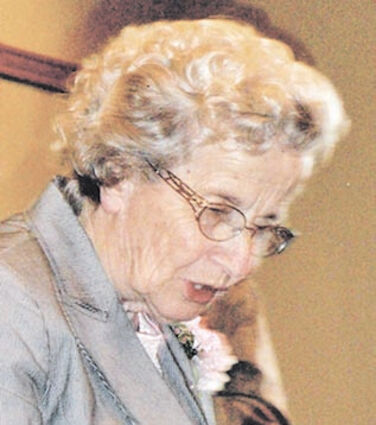 Ethel was proceeded in death by her parents; all of her siblings; and her beloved husband Fritz. Surviving her are Terry and Cheryl Wales; granddaughters, Brittany Ecton (Aaron), Jaimee Heltne (Patrick); bonus grandchildren, Jaelene Ritterhouse (Larry) and Jason Materi (Rachel).

She leaves behind ten great-grandchildren, Matthew and Jonathan Ecton, Jayden and Brooklyn Heltne, Jacob and Carson Ritterhouse and Marley, Collier, Piper and Dre Materi. Also surviving her are several nieces and nephews and their families and the church family she loved so much.

Funeral services were held Saturday, October 9, 2021. at the Church of Christ in Sundance, Wyoming, with burial following at Mt. Moriah Cemetery.

A memorial has been established to benefit Church of Christ Building Fund and Crook County Memorial Nursing Home.