Gene attended Beulah school in first and second grades, and the school is still standing. His parents divorced when he was seven years old.

He moved to Denver at the age of nine, with his father, and attended school there. At the age of 12, he returned to the Moskee area and lived with his mother and stepfather, William Charles Driskill.

He fixed fence and rode on the springs that summer. His seventh grade year, he lived in Tinton and helped his stepdad with engineering and mining activities.

He moved to the Campstool Ranch and worked there during the summers from his eighth grade year on. He attended school in Sundance, and lived at Mr. and Mrs. Dillon's Boarding House, graduating from Sundance High School in 1948.

He was drafted into the Army in 1951, after attending the School of Mines for one year of college. He served from 1951-1953 in Fort Bliss, Texas as Corporal Ewing.

Gene married Josephine Mayme Frank in Sundance on October 18, 1953. They lived on the Campstool Ranch, at the base of Devils Tower, Wyoming.

Gene was the ranch foreman for his stepfather, Billy Driskill. He supervised ranch hands, 700 head of cattle and put up 10,000 little hay bales in the big field of 160 acres.

He flood irrigated the hay fields with tarps. Gene was a great mechanic and fixed everything on the ranch.

They trailed over 1200 head of cattle from their ranch, and the PIC ranch, to Moskee by catching the highway at Carlile, Wyoming. It was over 12 miles to the summer pasture.

He did this for six years, before they started hauling them with trucks. During the 15 years on this ranch, while he was foreman, they raised their two sons, Bob and Brett.

They moved to Spearfish in 1967, and Gene opened up his own business, Gene's Radiator Shop. He closed the radiator shop in 1971 and worked for Lawrence Steele and Sons on a bridge crew.

They built 34 bridges in Wyoming and South Dakota. He helped build the first nine bridges around Spearfish. Later he opened his own H & R Block Tax office in Sturgis, South Dakota, which he ran for 15 years.

Gene was very active in the Spearfish Horseshoe Club and the state Horseshoe Pitching Association. He loved the sport and the participants.

Gene was inducted into the South Dakota and Wyoming Horseshoe Halls of Fame. When he could no longer throw the horse shoes in his late eighties, he continued to keep all the records for their events, including the state horse shoe pitching records.

He was a detailed bookkeeper and his efforts were appreciated by all members. Gene has also been a member of Hulett Masonic Lodge since 1950. He will be deeply missed by his family and friends. 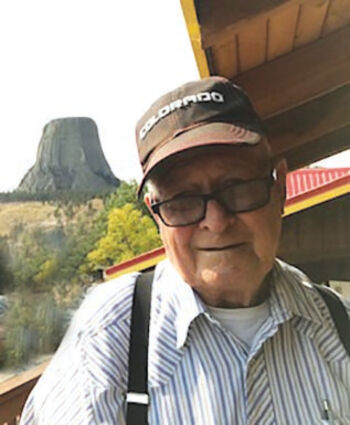 Burial will follow at Black Hills National Cemetery near Sturgis. In lieu of flowers, a memorial has been established to benefit Spearfish Horseshoe Club.