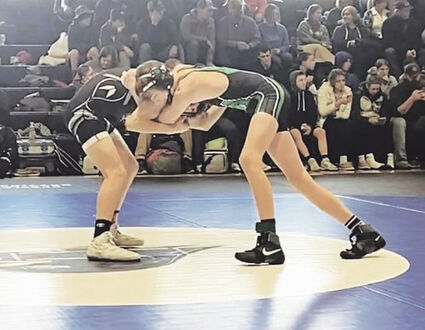 Dayne Humes ties up with his opponent.

The Wolves wrestling team traveled to Hettinger, ND this past weekend to compete in the Hettinger Classic Tournament. The tournament consisted of 14 teams from North Dakota, Montana, Wyoming and South Dakota.

The team finished in fifth place, had one wrestler in the finals and many other placers. This year the tournament also had the first all-girls varsity tournament with 21 girls competing in five weight divisions. The Wolves had two girls competing and one champion.

106 Dayne Humes went 6-1, dominating his way to the semifinals where he won by major decision, 1...