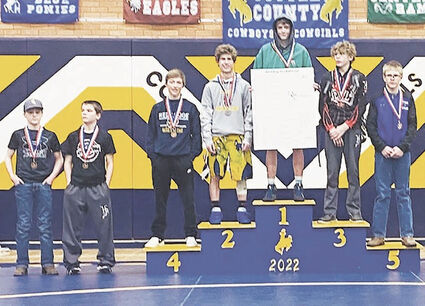 The Wolves wrestling team traveled to Miles City, MT this past weekend to wrestle in the 63rd Annual Cowboy Invitational tournament, competing against 23 teams. As a team, the Wolves placed 11th, bringing home one champion, Dayne Humes, and many placers.

Day two was a second chance tournament for those who went out on day one and they also held an all-girls division where Moorcroft had three girls competing. Individual results were:

103 Kade Haynes went 1-3 on the varsity side, placing eighth. He won his consolation match by decision, 9-5 to move into the placings where he lost by fall.