Following the Texas Trails through town

Museum program highlights the early history of the Moorcroft area 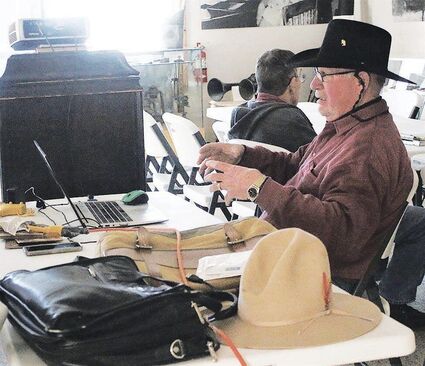 Rick Kaan presented a detailed overview of the cattlemen of Texas at the museum.

The cattlemen of Texas used to sell their stock to the South. When the Yankees took control of the Mississippi River at the beginning of the civil war, there was no longer a way to get the cattle to the buyers in the South, so the Texans joined the Confederates to help free the control of the river, leaving their herds behind unsupervised.

After the war and returning to Texas, they found approximately six million cattle roaming in South Texas and, because of the number of cattle, the price dropped rapidly. The ranchers could sell their cattle in Texas at $0.06 a head, but if they could get them to a railhead and ship them East they could sell them for $40.00 a head. So that is the beginning of the drives north.

Once cattle had been rounded up and initially conditioned to the presence of being moved as a unit, the process of long directional movements along a cattle trail began. Kaan said that a 10-14 day period was the duration taken to "trail break" the herd.

Eight to ten cowboys helped "trail break" the herd for up to two weeks then would peel off to break the next herd. After this, it was a long, slow process of moving cattle north from Texas up to Kansas, a distance spanning 600 miles that was covered at a pace of 9-10 miles a day for the next 90 days.

Kaan described the typical day in the life of a cowboy driving cattle along the trails. The cook prepared breakfast, often consisting of nothing more than warmed leftover beans from the previous day around 3:00 in the morning.

At daybreak, cowboys would go out and relieve the "night hawks" who came in and ate and tried to get some rest. The cowboys would begin gently moving the cattle north, allowing the herd to spread out between a half mile and a mile and graze as they moved along until mid morning, when mossbacks naturally began trailing to water.

At this time, the chuckwagon arrived and the herd rested near water until mid afternoon when the remuda of horses and cattle resumed grazing as they moved along the trail. At sunset, the cowboys would encircle them and bed them down in a group, which they were used to.

Cowboys would sing to the cattle, which the animals came to associate with being in safe and familiar circumstances, keeping them calm and manageable.

As the hundreds of thousands of cattle pushed north, they brought with them ticks and diseases that were unfamiliar to the area, starting the quarantine of Texas cattle in Missouri and Kansas and pushing the trail further west. Rick explained why they drove so many cattle to the far morth.

There are a couple reasons behind the why. One was government contracts to supply beef to the Indians on reservations, rancher contracts to ranchers up north, miners in mining camps, selling stock to packing plants in the east and the north (Chicago being the largest) and of course many large Texas ranches like the XIT, 101 Ranch Standard Cattle Co, N Bar N, Long X, Matador Land and Cattle Co., Seven D and the 777 started another ranch in the North, where there was an abundance of tall green grass and water. Many of you know that the 101 is still operating outside of Moorcroft today.

The numbers of cattle are astounding and many of the ranches still operate today. It is an estimate that approximate 1.2 million cattle made the trip north from Texas over a 20-year span, but the heaviest years were from 1885 to 1897, when there were an average of 75,000 cattle a year being pushed north.

Moorcroft was fortunate that the Belle Fourche River and the railroad line were close together, making for a humble start to our little town. Records indicate that 800,000 head of cattle were loaded onto railcars in Moorcroft 1894, giving Moorcroft the title of largest cattle shipping point in the west.

Just as all good things must come to an end, the cowboy way of life pushing cattle far into the north was no different. A few things helped to contribute to the end: westward expansion of settlers, fences, demand and of course they ran out of "free" cattle in Texas.

But the stories are still here and we hope to share many of them coming soon to the museum. Director Cindy Mosteller would love to visit with you if you have stories you can share on the cattle drives through Moorcroft or even just Moorcroft early history.

Rick will be back in the fall to do another presentation on the stage stops in Wyoming and South Dakota and their influences. Watch for more details to come.

Just a reminder the West Texas Trail Museum is open Monday through Friday 9 a.m. to 5 p.m. and Saturdays during the summer from 10 a.m. to 3 p.m. Of course, you can make arrangements with the museum for a private tour if you need to do it after hours just give the museum a call at 307-756-9300.