Victory for Lady Wolves over Bulldogs 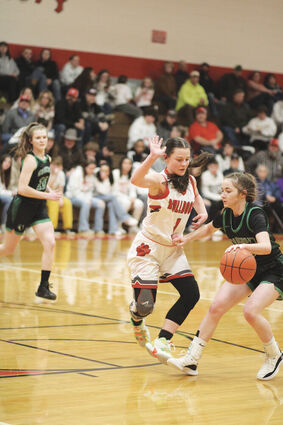 Talissa Fischbach positions for a shot.

On Thursday, the Lady Wolves traveled to Sundance to take on the Bulldogs. We knew going into the game that it was going to be a hard-fought battle.

Neither team was able to gain much ground in the fourth and the Lady Wolves were able to hang on for a 52-50 victory. It was good to come out with the win. Going on the road for a tough conference game and a rivalry game, it is always going to be competitive and challenging.

On Saturday, the Lady Wolves squared off against the Lady Eagles from Tongue River. Tongue River got out of the gates quickly and was up, 12-0, before the Wolves got their first bucket of the game midway through the first quarter.

The Wolves were able to hold Tongue River to nine points in the third quarter while outscoring them by 16. The Lady Wolves closed the game out with a strong fourth quarter for a 60-45 victory.

We started off cold, but we really got it going on the defensive end and that led to good offense. The girls played hard and kept chipping away at their lead until they had overcome it and then just kept going. I was really happy with our effort.

The Lady Wolves return to action at home on Tuesday night when they play the Bobcats from Upton and then travel to Lusk on Saturday to take on the Tigers. Come out and support your Moorcroft Wolves!