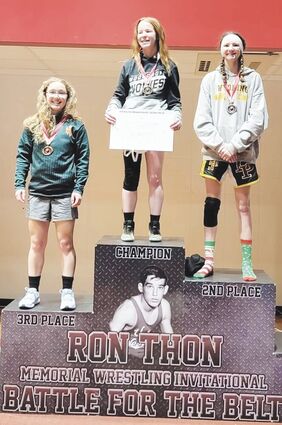 Rebekah Anderson placed 1st in the Girls Division winning all her matches by pins and not having a point scored against her all weekend.

This past weekend, the Wolves wrestling team traveled to Riverton to wrestle in the all-class Ron Thon Memorial tournament. The team was split between the junior varsity, varsity and girls division tournaments. Individual results were as follows.

106 Dayne Humes went 1-2, losing his first match in double overtime by decision, 15-10, won his second match by major decision, 11-2 and lost in the second round of consolations by decision to not place.