A graveside service will be held at 1 p.m. at Mt. Moriah Cemetery at Sundance, Wyoming, on Wednesday, February 16, 2022, for Robert Glenn Walkinshaw, aged 98.

Robert (or Ol' Bob, as he called himself) succumbed to a stroke at Crook County Hospital at 7:20 p.m. on February 9, 2022. There will be an informal gathering of friends and family after the service at the Sundance Church of Christ, 369 US-14, Sundance (West end near I-90).

He was born on March 21, 1923 at Uva, Wyoming, a small cattle-shipping railhead with a general store and dance hall at the northern edge of Wheatland that is now visible only as a raised grass-covered railbed. He grew up on the "Italic H" and nearby "VR" cattle ranches, managed by his father Robert and uncle Bill at a time when mechanical tractors were scarce on the ground.

His mother Mabel cooked for the ranch hands and haying crews while young Bob attended a one-room schoolhouse that was frequently dragged to locations midway between the outermost nearby ranches by horse teams.

His family moved into Wheatland where Bob and his sister Marion went to high school. He graduated with the class of 1941.

He was fascinated by flying from an early age and began lessons as a teenager, in exchange for maintenance help, from local single engine plane pilots. Bob began studies at the University of Wyoming at Laramie, but could not resist his country's call to arms, and enlisted in the U.S. Army Air Corps at Ft. Warren in Cheyenne, Wyoming, in November 1942. He completed military flying schools and was commissioned as a Second Lieutenant in June 1944 at Ellington Field.

There followed a long sea voyage aboard the troopship General Mann from Newport News, Virginia, through the Mediterranean Sea, the Suez Canal, the Red Sea and Indian Ocean. He joined the 14th Air Force ("Flying Tigers") 322nd Troop Carrier Squadron at their base in Kunming, China in late 1944, under the command of General Claire Chennault.

(The "Flying Tigers" had begun as the American Volunteer Group, China Air Task Force under the then-retired Gen. Chennault, but continued as the newly created 14th U.S. Air Force after the U.S. joined the WWII effort following the bombing of Pearl Harbor.)

Bob flew the C47 aircraft (the DC3 airliner, some of which still fly in rural areas worldwide today). His mission was to transport and distribute personnel, aviation fuel and supplies to forward-located air bases at Chickiang, Suichuan, Kanchow, Namyung, Changting, Chengtu, Liangshan, Chungking (the war-time capitol of China) and Sian (where the terra-cotta army of the first Chinese emperor was later found). Some of these bases were located behind Japanese-held lines.

The 322nd Squadron was moved to Hankow late in the war. (Hankow was one of three towns later incorporated as the city of Wuhan.) Now under the command of the 10th USAF, Ol' Bob flew C46 drop missions and trained Chinese paratroopers (note: like today's Special Operations Forces, these troopers bailed out at 300 ft. altitude).

After one year in China, Bob returned to the States, aboard the baby aircraft carrier U.S.S. Makin Island. The voyage was enlivened by a typhoon in the Pacific Ocean but was able to continue to Seattle after repairs in Honolulu. The 322nd Squadron was deactivated.

Bob married Carol Paulson June 30, 1946 in Glenrock, Wyoming and had two sons, Bill and Don. He returned to the University of Wyoming at Laramie to complete a BA degree. Bob was recalled to active (but sadly, non-flying) duty during the Korean War in 1951-1952, stationed at Warren AFB.

Bob later attended Oregon State University at Corvallis for a Master's Degree in Industrial Arts. He taught industrial arts at Midwest High School, then joined the faculty of the newly forming Casper College in 1956.

Initially, he taught analytical Geometry, Drafting and Architectural Drawing. He and Carol were divorced in 1971.

Later, he became the director of the physical plant, in charge of all maintenance, infrastructure and new construction. Many of the current Casper College buildings were constructed during "his watch."

He married Janet Nye, the Director of the Licensed Practical Nursing Program in 1976. Her three grown children (Chris, Holly and David) became his stepchildren.

Both Bob and Janet retired from Casper College in the 1980s. They lived briefly in Northern Idaho, but returned in 1997 to their final residence at Rimrock Ranch south of Sundance.

During his life, Bob was an avid hunter, outdoorsman, cattle rancher and aviator who flew his private single engine plane until the early 1990s. He and Janet attended most of the 14th U.S. Air Force Association "Flying Tigers" Annual Conventions and Arlington Memorial Services until that Association dissolved in the 2000s as the WWII air warriors became less able to travel.

His Squadron parties were by far the largest at each Convention, as he kept the organization together by writing Squadron Newsletters, his principal retirement hobby. 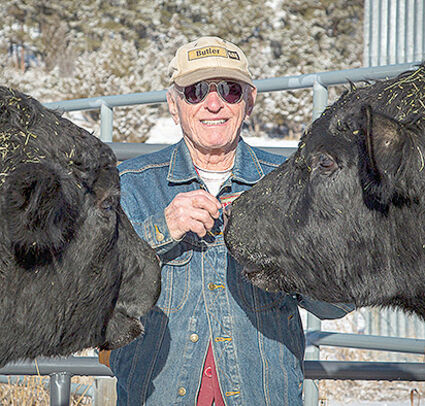 Bob and Janet enjoyed four long trips to Great Britain, visiting friends and exploring their English and Scottish ancestries during the 1980s and 1990s. They resided at Rimrock Ranch with their caregiver Holly until their passing.