Public Works gets ready for summer 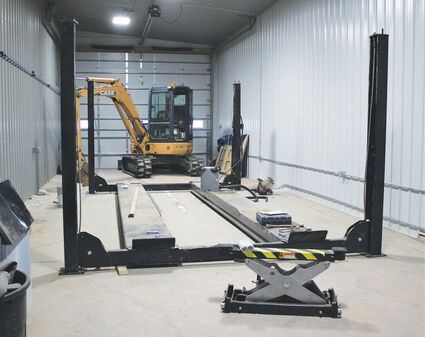 This vehicle lift was installed last week in a fourth bay specifically built for that purpose.

"Cleaning it is a work in progress," he says.

The crew has also observed suggestions from Chief of Police Bill Bryant for an adjustment and increase of stop signs along North Belle Fourche Avenue.

"They had [the yield signs] the other way and when it's slick on those hills, cars just can't stop so they wanted them switched," Allison says.

"Plus, it keeps the traffic slower, when there are no stop signs at all on that street, people end up driving a little faster; just a safety precaution."

After considering a number of items previously purchased, but left uninstalled by the council and department director preceding those currently serving Moorcroft residents, Allison and his crew have been slowly putting everything to use, including a lift.

"We were going to install it, but we had the heated floors and could not find a good spot to do it," explains Allison,

"Now that we have that other bay, we're installing it there, that's what we built that for."

Allison instructed members of his crew during slower days this month to install the vehicle lift, which is similar to those found in any commercial garage for oil changes and so on, in this new bay. The vehicle lift has lain unused and still packaged for several years.

With the completion of the installation, Allison plans to bring oil changes and other maintenance tasks on the smaller pickups in-house to mitigate budget expenditures.

Mayor Ben Glenn later voiced his support, "It is a really nice lift. I went and looked at it... It should help with our maintenance."