Funeral service for Kenneth Duvall will be held at 2:00 p.m., Friday, April 8, 2022 at Gillette Memorial Chapel with Pastor Donovan Voigt officiating; interment to follow at Mt. Pisgah Cemetery. Visitation will start one hour prior to services. Kenneth R. Duvall passed at his home on Saturday, April 2, 2022, with the presence of his loving family at his side. Kenneth Duvall was the fifth of eight children born to James and Elsie Weaver Duvall. He was the third generation of his family to live in Campbell County. Kenneth started working at a young age by hauling fertilizer for the garden and ice from the ice cellar in order to stock the ice box and make ice cream. Always industrious and creative, Ken would later buy a goat and rig his wagon to it for the goat to pull, reducing his workload. He pedaled the grinder wheel for his Dad to sharpen mower sickles, and at age 10 he hauled his first load of coal. By age 13, he trained his favorite horse, Roscoe, while riding bareback. Ken reservoired with a four-horse hitch using a fresno with his brother, Carroll, and they were also the caretakers of livestock riding the rail to market in Omaha. A Jack-of-all-trades, Ken also did some sheepherding and electrical work with his brother, Merle. During the war years, Ken started school later than most, in November, as his help was needed through the harvest season. Somehow, he managed to catch up on his delayed studies and even found time to play basketball. Ken would ride the bus home, but returned on horseback, as using headlights was not allowed during the war. Luckily, the horse knew its way home. In 1944, Ken graduated from Rozet High School as salutatorian, and shortly thereafter received notice that he was chosen to serve his country in the war effort. He was trained to fight in the South Pacific but after the bombs were dropped he was placed in the Army Transportation Corps Ship Repair Unit. His orders were to return the woman and girls captured by the Japanese to the Aleutian Islands. He landed there on Christmas Day of 1945, mission accomplished. Since Ken could type, he became a supply clerk before returning to the mainland in October of 1946. After his discharge from the Army, Ken went to work for Farmers' Coop, waiting on customers and keeping the books, before going to work for Wyodak in the winter of 1949. While at a community dance, a friend introduced Ken to his "spare" girl, Norma Hayden, and on September 24, 1950, they married in Sheridan, Wyoming. The two newlyweds quickly set off to accomplish their dream of owning their own ranch and purchased land southeast of Gillette. Norma and Ken raised sheep, cattle, American Shetlands, and, for a short time, milk cows and hogs as well. Ken also worked for Hayden Brothers, Clabaughs, and other ranches too, before running heavy equipment for Kummerfeld Construction, mining uranium at Pumpkin Buttes, building bridges for Huseman Brothers, wiring rural schoolhouses, and work he garnered with the Farmers Coop elevator as well as welding work with the railroad. Ken's mechanical abilities were inherited from his father, and his carpentry skills from his grandfather. Fred Kummerfeld taught Ken to trail large numbers of livestock by himself, and he wore out many a shovel digging ditches and fencepost holes. Such in-demand skills were often requested by neighbors and friends, and Ken always obliged. Ken remembered things we never had to live through, like the Dust Bowl days and the routine of going into the cellar with the snakes until everything settled. His memories of the "tumbleweed Christmas Tree" were quite vivid. The first movie Ken ever saw was "The Good Ship Lollipop" and his first vehicle was a Model A Ford. His first new car was a '49 Studebaker. Ken may have enjoyed sharing his love of horses, tractors, the ranch, and hunting predators, but he truly treasured his close relationships with friends and family. He is survived by his daughters, Kenna Lou and Karen; brother, Verlin; and numerous nieces and nephews. Ken was preceded in death by his wife of 55 years, Norma Lou; brothers, Carroll, Merle, and James Clarke; sisters, Marguerite Kummerfeld, NormaLee Duvall, Nadine Moser; and two nephews, Johnny and Merle Lynn Duvall. In lieu of flowers, please make a memorial contribution in Kenneth's name to the Gillette American Legion, VFW, or The Rockpile Museum Association. Memorials and condolences may be sent in care of Gillette Memorial Chapel 210 West 5th Street, Gillette, WY 82716. Condolences may also be expressed at http://www.gillettmemorialchapel.com 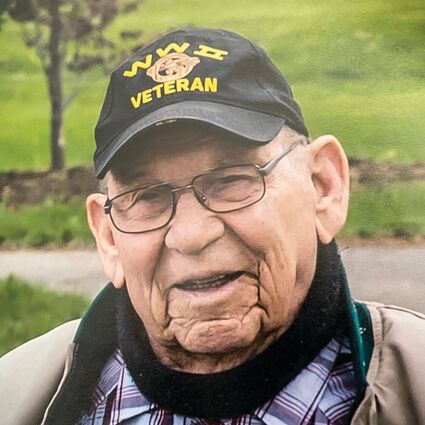