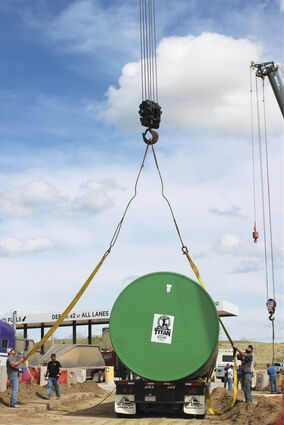 The Fuel tank is removed from the trailer to be placed underground at Coffee Cup Fuel Stop last week.

Parking lot traffic has been interrupted periodically as pumps, canopy and, finally, tanks were removed from the west side of long-time local business Coffee Cup Fuel Stop over the last couple of months.

Then, last week, crews again closed the area immediately surrounding the site as two 30,000 gallon steel tanks wrapped with a composite of fiberglass and other materials were lowered into the prepared seat.

Coffee Cup manager Toni Kornemann says the former tanks had reached the end of their safe life time, as has the tanks beneath the south pumps.

With the installation of the two gasoline tanks done, a single diesel tank is soon to be installed further south of this east new build. There will be one significant change in these east pumps, according to Kornemann, "The canopies will run north and south instead of east/west."

She hopes to see the pumps open again before the end of June.

"We'll get the gas islands in first and get those set and running so people can actually stop and pump, then they will tear those out down there [south pumps] and pull those tanks out."

Kornemann anticipates completion of the work on the south fueling station before the end of August barring any unforeseen issues.

Seven tanks are being replaced this summer, three on the east side and four to the south. The north diesel tanks under the truck station are not quite ten years old with plenty of useful life left to them.