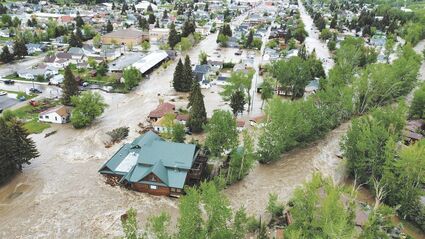 Kevin Kinzely for the Powell Tribune

Flooding in Red Lodge, Montana, has affected homes and businesses on Broadway and several roads near the city center. Access to the town is limited due to road closings on Highway 308 and U.S. Highway 212, including the Beartooth Pass.

POWELL - Unprecedented rain, combined with fast melting late season snow, has flooded nearby communities and forced the closure and evacuation of Yellowstone National Park and nearby attractions.

Visitors in Yellowstone National Park were being evacuated Monday, as several roads in the park were closed due to substantial flooding, rockslides and mudslides from the recent unprecedented amounts of rainfall. At 10:45 a.m. Monday, the park closed all entrances to inbound traffic due to hazardous conditions inside the park - a first in decades, if ever, for the park. "

Due to record flooding ev...