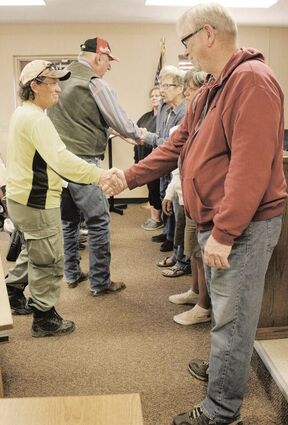 Sunny Schell smiles as she shakes the hands of council members and accepts the thanks of neighbors with whom she works every day.

Council members positioned themselves in a standing room only chamber as firemen and EMTs came forward as their names were called according to their years in service.

"A year ago," Brandenburg espoused, "Last year, we only had eight to ten fire fighters; today, we are up to 20 firefighters and we thank all of you."

June 16 was "the first anniversary of the big fire we had here in town", the mayor reminisced on last summer's close call.