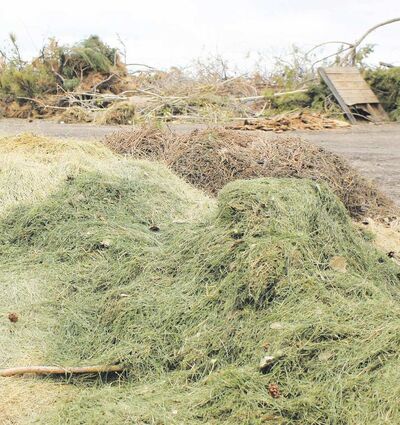 Pine Haven's council wants to be sure the slash pile is used safely.

With summer moving in, the safe and correct use of Pine Haven's slash pile is a subject of discussion once again.

Public Works Director Sunny Schell is composting grass clippings, ash and dirt on the south end of the burn pile. Fire Chief TJ Gideon reminds residents to remove any plastic bags in which the clippings are transported as the yard waste is deposited into this composting pile, ensuring no decomposing material spontaneously combusts. Do not add these clippings to the main pile.

Mayor Karla Brandenburg reported that they had already dealt with one, whom she did not name, "[They] actually called me [and] were cutting some trees for a person who lives here... I told them they had to take it somewhere else."

She added, "We are working on that, to keep commercial people from dumping there."

Gideon commended the majority of users, though, saying that other than this issue, most residents are handling the slash pile appropriately.

"Every time we've burned that, for the last four times, somebody's gone up there and started throwing stuff on top of that pile when we were trying to let it burn down; when the town burns that pile, I don't want to see anybody up there dumping anything on it while that pile's still hot," he said.

In the future, according to Lancaster, signs will be posted, warning that the area will be closed during this time "until such time that we deem that it's completely out". He expressed his deep concern, "We don't want anybody going up there and throwing something on that pile in the middle of the night and, all of a sudden, we get a strong wind and we've got this fire going. We don't need that in town."

Brandenburg assured everyone that the area will be fenced in the next budget year, which starts July 1, "So when they are [burning that pile], it will be locked so nobody can get in there."