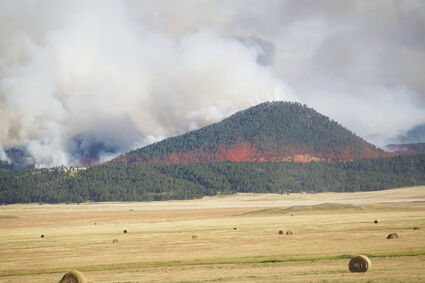 Slurry fire retardant settles after a bomber makes a run at the edge of the Fish fire on Highway 585 on Monday.

A fire burning in steep, rugged terrain on Iron Mountain, seven miles south of Sundance, had grown to 6500 acres by Tuesday afternoon after expanding overnight as high winds caused it to run past the control lines. At time of going to press, the fire was zero percent contained with no estimate as to when it would be brought under control.

The cause of the Fish Wildfire is under investigation, but the U.S. Forest Service has stated it is believed to have been human-caused on private...