Rolling out the hose.

At approximately 8:45 a.m. on Saturday, the Moorcroft and Pine Haven Volunteer Fire Departments were called out to a structure fire reported at 312 North Yellowstone.

According to long-time firefighter Fred Devish, a compromised stove pipe traveling up through the structural chimney from a wood burning stove was the culprit. The fire subsequently moved from the chimney into "a little bit of the roof materials", necessitating the fire crews to soak the space between the outer and inner layers of cover within and immediately around the affected area.

To prevent further danger, the stove was removed from the building with fuel still ablaze within. 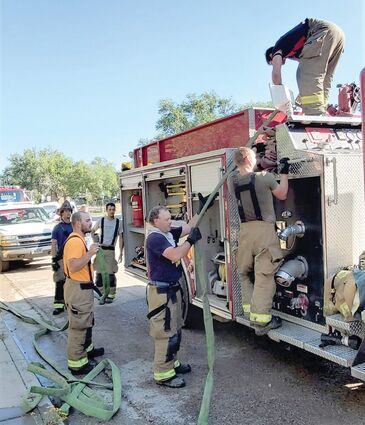 Volunteers responded to the fire from both Moorcroft and Pine Haven.

Nine of the Moorcroft volunteers responded to this call, six attended from Pine Haven and the firefighters had the flame out and the property safe within an hour of arrival.

"We went in the front door with a ventilation fan to get the smoke out and went up on the roof and opened that up [to] look for that fire," says Devish. "We took the thermal imager and determined the temperature all around there was at 70ᵒ or less, packed up our toys and went home."

Due to the quick thinking of the homeowner, Devish stated later, "They realized they had a problem and hit it with a fire extinguisher right off the bat and that probably saved [the structure]; it definitely slowed [the fire] down enough so we could get there."

There were no casualties nor injuries and a relatively small amount of property damage from this blaze.