Lila June Lamb-Dudrey, 93, was received into God's holy kingdom on November 21, 2022, leaving her family with a treasured legacy of quiet, steadfast love. She passed at the Legacy Living Center in Gillette, Wyoming, where she has resided for the past few years.

Lila June was born on April 23, 1929, at the family residence in Albion, Nebraska. She was the fifth of seven children born to Chester Oliver Lamb and Pearl LaVina McCone-Lamb.

All of the children were born at home. Her father was a farmer and her mother a housewife.

Lila and her family lived in Nebraska until the untimely death of her mother, Pearl, who passed when Lila was eight years old. That left her father to raise seven children on his own.

Times were hard, money was in short supply, so Chester loaded up the children and moved them to Sundance, Wyoming, three miles south of town to his homestead that he had claimed before his marriage to Pearl. The children attended the Schelldorf country school until they started to attend high school in Sundance.

They walked to school, three miles both ways, in all kinds of weather, often without proper attire and following the fence line during blizzards to get to and from school. Life was anything but easy.

Lila graduated from Sundance High School with the class of 1947. She wrote the Senior Class Poem, "Success Awaits at Labor's Gates," for the high school annual.

She immediately started working for Jay Durfee at the Sundance State Bank, riding her horse to the stable, changing clothes there and walking on to work. She would repeat the process for her ride home.

When the weather was inclement, she would board with Mrs. Dillon in Sundance, who always saved an extra piece of homemade pie for her. Lila would continue to work for the Sundance State Bank for 43 years, becoming a bank officer later in her career.

Lila was a dedicated worker who rarely missed coming to work. Once she rode her horse in a blizzard only to find the bank had been closed and she was stuck in town.

On October 10, 1954, she married Kenneth Addison Dudrey, who had returned from playing professional baseball after his stint serving as a Sergeant in the US Army stationed in Korea. They made their home in Sundance with Kenny working at the Model Grocery and Lila working at the bank.

Lila retired from the bank in 1995 and enjoyed spending time with her daughter's family, which consisted of two grandsons, and going on many adventurous trips with her girlfriends. She looked forward each fall to her trips with Peggy to their favorite spot in Roughlock Falls in Spearfish Canyon, and all the long drives and conversations they had through the years.

She was always a petite lady, slow to anger, kind and gentle to everyone she was around, putting everyone's needs above her own. She was a strong little woman who faced every challenge in life with courage, kindness and grace.

Lila was a lifetime member of the VFW Ladies Auxiliary, United Methodist Church and Give and Gain Homemaker's Club. She attending every sporting event of her grandsons, Nolan and Devin, and participated and enjoyed the growing years of her girls and grandsons. In later years, her companion, Lionel Asher, helped fill her days with happiness.

She is preceded in death by her parents, Chester and Pearl Lamb; all of her siblings: Iva Imogene Ruger, Darrel Lamb, Arlene Heppner, Keith Lamb, Duane Lamb and Charlotte Engstrom; her husband, Kenneth Dudrey; her daughter Judy in 1994; and her companion, Lionel Asher. 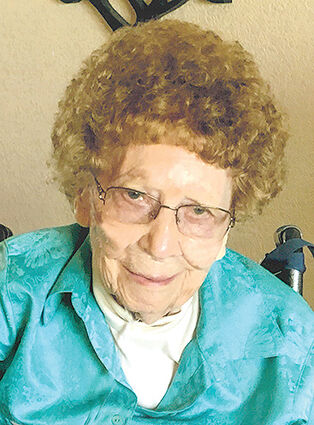 Lila will always be a source of inspiration, a smile in our hearts and a kiss on our souls. It was our greatest pleasure to have you as our mother, grandmother, great grandmother and friend to many.

May eternal rest be granted unto her, O Lord, and let perpetual light shine upon her. We know you will always be with us and you are loved beyond measure.

Funeral services were on Wednesday, November 30, 2022 at the United Methodist Church in Sundance. Burial was at Black Hills National Cemetery near Sturgis, South Dakota. Memorials in her name will be established to the Sundance Methodist Church and/or St. Joseph's Children's Home in Torrington, Wyoming.